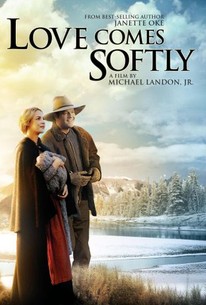 In the family-entertainment tradition of his multi-talented father Michael Landon, writer/director Michael Landon Jr. offered this made-for-cable frontier drama, adapted from a novel by Janet Oke. En route to her new home in the West, Marty Claridge (Katherine Heigl) suddenly finds herself a widow, with no roof over her head or means to support herself. At the gentle prodding of her settler friends Ben and Sarah Graham (Corbin Bernsen, Theresa Russell), Marty accepts the marriage proposal of taciturn widower Clark Davis (Dale Midkiff). It is strictly a business arrangement, with no romance or cohabitation involved; Marty will act as housekeeper to Davis and as teacher and surrogate mother for Clark's sullen nine-year-old daughter Missy (Skye McCole Bartusiak), and in return she will receive food and lodging. Pragmatists both, Marty and Clark assume that they will dissolve their marriage of convenience when the spring thaw comes...but that isn't how things turn out. Love Comes Softly first aired April 13, 2003, on the Hallmark Channel.

While it may seem like just a Christian 'Chick Flick on the Prairie,' it explores several deep theological and cultural themes that make for good viewing by men and women.

The film's pace is abysmal like too little grass spread across too much lawn.

...it becomes increasingly difficult to resist the film's charms as it progresses, primarily thanks to the warm and inviting central performances.

As per the movie title, it starts out as an necessary arrangement (Clark and Marty spending the winter together), but love comes softly. Actually even though it is a formula-type movie, it is believable - not bad even.

Love comes softly is about A couple that goes out west and then the husband dies out of blue. The young wife was l left by herself without a house and she didn't know what to do. Then a single man offer her a place to stay if she could turn his kid's life back around. At first she rebel and refuse the help but over time She learns to make her self accept in the family. Will she stay pass winter or will she leave the father and the kid? Pros Good acting and plot Funny at times Good cast Little bit of twist ending.

i love anything katherine heigl stars in,a great movie this one!!!