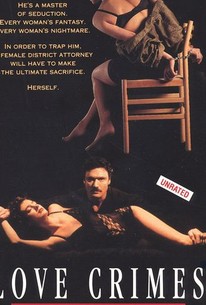 Love Crimes, an erotic thriller directed by Lizzie Borden, explores the psychology of a con man posing as a photographer, who seduces women and then blackmails them using humiliating, revealing pictures he has taken of them. David Hanover (Patrick Bergin) preys on the hopes of women by offering them love and a possible career as fashion models. When some of the women complain, but refuse to aid in Hanover's prosecution, DA Dana Greenway (Sean Young) becomes obsessed with catching Hanover, to the point where she tracks him down and spys on him in his secluded home, making herself a potential victim. He catches her and holds her captive. Feminist filmmaker Borden, who also directed the remarkable, low-budget film Working Girls, raises interesting questions regarding sex, humiliation and male-female relationships, but the film is spoiled by the ambiguity of her central character, Dana. An abused child herself, she has the same self-loathing that the other woman who are preyed upon by Hanover possess, but her motivations for her actions remain murky. Despite these flaws, Borden, always an interesting filmmaker, raises important issues which perhaps can't be adequately resolved using the restrictions of the thriller genre.

John Hambrick
as Man in Trailer

Although neither a traditional love story nor tautly plotted crime picture, Borden's Love Crimes perversely plays with both genres.

There are no featured reviews for Love Crimes at this time.