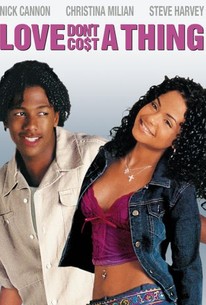 The sophomore outing for writer/director/actress Troy Beyer, Love Don't Cost a Thing is a romantic teen comedy based on the screenplay for the 1987 Partick Dempsey film Can't Buy Me Love. Nick Cannon stars as Alvin, a brilliant but awkward teenager -- and budding engineer -- who seizes a golden opportunity when popular cheerleader Paris (Christina Milian) wrecks her parents' SUV and is strapped for cash. They strike an agreement: Alvin will do the repairs for free if Paris pretend to be his girlfriend for two weeks, all in the hopes of elevating his social standing. Little does he know, being popular isn't all its cracked up to be. Kal Penn and Steve Harvey co-star.

Ben Stephens
as Jock No. 1

Stuffed with attitude but just as hackneyed as the original.

Another uninspired remake of a movie that was never crying out for revisitation in the first place.

Since Cannon and Milian have to squash any frisson to avoid sinking into pure escort-service sleaze, there's not much rom in the rom-com.

It has better values than the original, a little more poignancy, some sweetness.

"Love Don't Cost A Thing" is loosely based on the 1987 teen comedy "Can't Buy Me Love," and fails to improve on that tepid movie by using a milieu of black high school students.

High school films don't have to be dull or juvenile; this one suffers tremendously from the former.

...the movie borders on cruelty to its audience.

It isn't entertaining enough to get away with its minimal contributions to familiar material.

[I]t's hard to see any crying need to remake a film that was tacky the last time around, or to make this the black teen - excuse me, "urban" - film of the season.

I don't know what it is about the flu that always seems to result in me thinking it's a good idea to watch something I have previously avoided like the plague. Maybe knowing full well I will be asleep by half way through it anyhow. Unfortunately I didn't fall asleep watching this. I wish I had. Horrible remake of an all time favourite 80's movie "Can't buy me love". Christina Milian is not too bad, but the rest are atrocious. The guy is so hammy, and the crude talk with his father. ugh.

This story is about "wanna-be" of a boy and the same old ending that fakers never win or fit in to whatever they wish for. This was okay.

This was actually a good movie of its genre...Come on, its a teen movie and what actually do you expect? Pretty good stuff. Have a look at more of Nick Cannons films,(Drum line/Bobbie) hes pretty good.

Too bad this movie did.