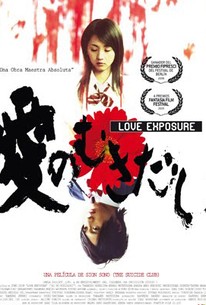 Tokyo teen Yu Honda (Takahiro Nishijima) is the traumatized son of a widower-cum-Catholic priest (Atsuro Watabe), who begins a sexual liaison with parishioner Kaori (Makiko Watanabe). When Dad's affair comes to a halt, he begins admonishing his son to confess to so many sins that the 17-year-old takes up new ones to appease his father's increased religious zeal. One "sin" - surreptitiously taking candid photographs of panties worn by female pedestrians - becomes a vocation. Unfortunately, a deal with a porn company comes undone when Yu turns down starring roles, because he admits he's saving himself for a Virgin Mary-like ideal woman. On cue, the narrative introduces feisty schoolgirl Yoko (Hikari Mitsushima), who loathes men and enjoys beating them up for their moronic attitudes... -- (C) Third Window Films

Mami Nakamura
as Yû no Haha

Itsuji Itao
as Koike no Chichi

Exhibiting astonishing dexterity, Mr. Sono shapes all this trauma into a narrative that's completely coherent and surprisingly touching, never more so than in Yu's struggle toward sexual maturity.

It's a campy rampage that runs a few minutes shy of four hours, dooming what otherwise would likely be a bright future as a midnight movie.

As the old cliche goes, you will not have another moviegoing experience quite like this one all year.

Love Exposure is, in a sense, Shion Sono's equivalent of the Great Russian novel.

Love Exposure plays like a marathon greatest-hits-and-misses mixtape. If you see only one Sono film, check out this flick; you will have then seen them all.

A film about being overwhelmed, as much as it's an overwhelming film, and it's the most excitingly exhausting kind of too much.

Manga-indebted but without lens trickery, this is exhilarating cinema experience.

This four-hour opus about the fury of love and the love of fury is ritually fascinating, often excessive and, with a caution the film wields like a blade, achingly poignant.

The more you can let this amazing, unbelievable film overwhelm you, the better.

It's different, but it's exhausting. Without ever being funny, it keeps up a strident, cartoonish tone for all of its four hours.

The son of a Catholic priest becomes a master at shooting candid panty photographs, then falls in love with a man-hating schoolgirl and seeks to save her from a cult. This naughty 4-hour comic epic from cult director Shion Sono is a strange and subversive examination of the perversion of purity, and vice versa.

[img]http://images.rottentomatoes.com/images/user/icons/icon14.gif[/img] Love Exposure is one of the most interesting foreign works of the year. It's a movie about political, religious and social ideas, and there's a hell of a lot of them squashed together but it doesn't lack for any heart, emotion and is never for one moment dull. The performances of the cast are amazing and in equal measure the direction is very precise. It's a very emotional film and i'd highly recommend it to art house fans because it's one of the most artsy films i've ever seen. The only problems with this movie are that it fails to maintain a consistent tone and a lot of the scenes in it were unnecessary. This can all be ignored though, because it is still immensely entertaining and will take you on a stylishly surreal ride if you have an open mind for films. To put it simply, weird but undeniably wonderful.

Really weird and 4-hour Japanese comedy-action-drama film about the three emotionally abused individuals from the fringes of society get locked in a convoluted love triangle. I couldn't believe this ridiculous story is true and this mix scenes didn't work very well for me. The overall story about love and religion lacks a bit, but the worst thing is how it's played out. There are so many weird scenes that the overall story gets a bit lost on the way, and you have a hard time appreciating the movie as a whole. But I liked the last confrontation scene while Yu gets crazy, Yoko cries, and Aya kills herself, and then there's no sound, everything was in slow motion. That was very momentous.

Sion Sono's Love Exposure is a comedy romance that isn't afraid to go there.

With a run time of just under 4 hours, yeah that's right, this film comes down to being a love story. However, this movie is far from romantic. Sion finds a way to tell the story in a religious sexually offensive way.

There is no nudity aside from a few fake male nudity shots, but there are tons of panty shots as well as some passionate lesbian scenes. The violence is also pretty bloody when it shows up.

The film is told in chapters and the first 3 are entertaining. After this, the film slowly loses its entertainment value. The second half of the film is basically one long chapter, which makes one wonder why there were chapters in the first place. Nevertheless, it isn't necessarily the long run time that hurts this film because every thing that happens is integral to the story. It is the second half of the film where it loses the pizazz from the early going that disappoints. That's not to say that the film gets boring, but it sure as heck isn't exciting.

Takahiro Nishijima, Hikari Mitsushima, and Sakura Ando are the 3 actors to look out for, as all put on good performances. Takahiro and Hikari stand out the most, since their characters morph as the film progresses.

Take caution when viewing this picture. Put aside all values and take the 4 hour ride of love.