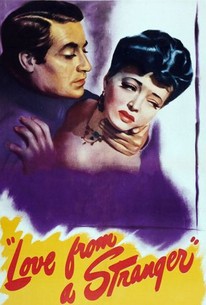 Love from a Stranger Photos

Based on the novel by Agatha Christie and play by Frank Vosper, Love From a Stranger isn't quite as good as the 1937 version of the same property. This time, Sylvia Sidney and John Hodiak play the roles originally filled by Ann Harding and Basil Rathbone. Falling under the romantic spell of charismatic Manuel Cortez (Hodiak), impressionable sweepstakes winner Cecily Harrington (Sidney) marries him after a whirlwind courtship. It doesn't take long for Cecily to figure out that Cortez is a dangerous psychotic, bent on murdering his wife and claiming her fortune. Unable to convince anyone else of Cortez intentions (even though his behavior would, in real life, get him locked away in a minute), Cecily determines to outsmart her husband and catch him in his own trap. Ironically, Frank Vosper never saw either film version of Love From a Stranger, having died under mysterious circumstances in 1937 (too bad Agatha Christie never wrote that story!)

Nolan Leary
as Man in bar

Anita Bolster
as Ethel the Maid

Abe Dinovitch
as Man
View All

Critic Reviews for Love from a Stranger

There are no critic reviews yet for Love from a Stranger. Keep checking Rotten Tomatoes for updates!

There are no featured reviews for Love from a Stranger at this time.

Love from a Stranger Quotes