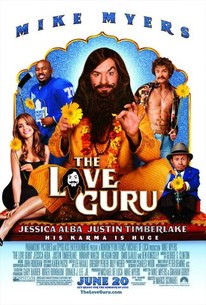 Critics Consensus: The Love Guru features far too many gross-out gags, and too few earned laughs, ranking as one of Mike Myers' poorest outings.

Critics Consensus: The Love Guru features far too many gross-out gags, and too few earned laughs, ranking as one of Mike Myers' poorest outings.

Critic Consensus: The Love Guru features far too many gross-out gags, and too few earned laughs, ranking as one of Mike Myers' poorest outings.

Austin Powers trilogy star Mike Myers collaborates with writer Graham Gordy for this comedy concerning a self-help guru named Pitka (Myers) who devotes his life to unknotting the romantic entanglements of troubled couples. As a young child, Pitka is abandoned at the gates of an ashram in India and taken in by kindly gurus. An American by birth, Pitka absorbs the lessons taught to him by his teachers and later returns to the United States to become a leading authority on spirituality and self-help. While Pitka's methods are decidedly unorthodox, they may be the only means of ensuring that the Toronto Maple Leafs win the coveted Stanley Cup. Maple Leafs star Darren Roanoke (Romany Malco) is in trouble. His estranged wife has recently begun dating L.A. Kings star Jacques Grande (Justin Timberlake) in a vengeful effort to send her husband's career into a tailspin, and when Roanoke starts to falter on the ice, the whole team starts to suffer. As their visions of leading the Maple Leafs to the Stanley Cup are quickly going up in flames, team owner Jane Bullard (Jessica Alba) and Coach Cherkov (Verne Troyer) enlist the aid of the world's best-known relationship expert in restoring the peace between Roanoke and his wife, and getting their team back on track to the championships.

Robert Blake
as Himself

Jessica Simpson
as Herself

Deepak Chopra
as Himself

Rob Blake
as Himself

Kanye West
as Himself

Mariska Hargitay
as Herself

News & Interviews for The Love Guru

View All The Love Guru News

Critic Reviews for The Love Guru

At one point Kingsley's character makes his pupils duel with mops soaked in his own urine. If you think that's funny, be my guest.

You'll wish the once-talented Myers had merely rested on his laurels rather than pooping into them.

Funny in fits and starts, though the fits are a little convulsive and the starts seldom come with a convincing ending or pay-off.

To describe this holistic-healing comedy as anything other than terrible would be gross dereliction of duty, but I'll make one concession: it's kind of meant to be.

Myers' shtick isn't for everyone, but I laughed. Looking around, however, I saw that my fellow critics were enjoying themselves as much as Gordon Brown on the beach at Southwold.

Myers has created in Pitka a character that's sexually ambiguous, deeply neurotic and far more fascinating than the puerile script.

One of summer 2008's most disappointing films.

Myers has this unerringly creepy way of delivering punchlines straight to camera and laughing like a ninny. He does it too quickly - almost desperately - as if he knows the audience won't be chuckling once the joke is told.

Watching this feels like you're being repeatedly dumped by the love of your life.

No doubt, I'm not the target demographic for this movie. And I could be wrong. But I'd be shocked, and dismayed, if it's a hit, and even more shocked and dismayed if it begets a new Mike Myers franchise.

For the first half hour of this badly misconceived Mike Myers movie, I did not laugh.

Audience Reviews for The Love Guru

A movie so absolutely puerile, unfunny and dreadful in every aspect imaginable that it makes you want to take Mike Myers by the hair and beat him with a tire iron. Is there really still anyone in this planet who thinks that name puns and diarrhea jokes are at all funny? (Zero stars)

A horrible movie. I laughed maybe twice at this crappy film, not only was it stupid, there was no point to it. I cant say anything else about it because it sucked so much.

Mike Myers has done it again. He's made another totally pointless, but beyond hysterical movie. As long as you know it's going to be stupid and going for cheap laughs, then you'll have fun. Justin Timberlake is funnier than I thought he would or could be. Jessica Alba still sucks. But it's a good movie about a love guru helping people fix love while he finds it.

Not that funny and/or exciting. Although Justin Timberlake was brilliant and I would probably watch more of him doing that character.