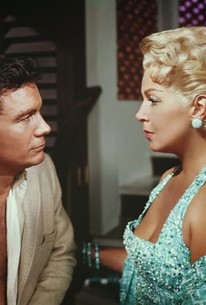 Love Has Many Faces Photos

Repeated infidelities and an unexplained death set the stage for this glossy soap opera. Kit Jordan (Lana Turner) is a wealthy woman slipping into middle age who likes attractive men and isn't averse to the notion of paying for their company. Her husband Pete (Cliff Robertson) is a one-time gigolo whom Kit met on the beach of the ocean side community in Acapulco she calls home. Neither are much on fidelity, and Pete sometimes has mistresses just as Kit has her boy-toys whom she meets in much the same way as she met him. One day, a dead body washes up to the shore wearing a bracelet with the inscription "Love Is Thin Ice." It turns out that the man was one of Kit's many former boyfriends, and the police are not sure if the death was an accident, suicide, or possibly murder -- with the Jordans as suspects. Carol Lambert (Stefanie Powers), the dead man's sister, arrives in town to get to the bottom of her brother's death, but she falls into a fling with Pete. Meanwhile, Hank (Hugh O'Brien), another beach bum, has been dallying with rich widow Margot Eliot (Ruth Roman), but with Pete getting more serious about Carol, he begins to think that Kit might be a more lucrative target for his affections. As the police step up their investigation of the death, the parties involved begin to realize that they're all going to have to settle on one partner, once and for all. Turner's costumes were designed by Edith Head, who spent a then-record $1 million on the many stylish beach outfits which are frequently changed by the cast. ~ Mark Deming, Rovi

Rene Dupreyon
as Ramos
View All

Critic Reviews for Love Has Many Faces

There are no critic reviews yet for Love Has Many Faces. Keep checking Rotten Tomatoes for updates!

Audience Reviews for Love Has Many Faces

Expensive looking production is a trashy delight with Lana having many costume changes. She looks amazing in them all. They probably had extra money for them on what they saved on Hugh O'Brian's wardrobe, rare is the time he wears more than a brightly colored speedo. Ruth Roman gives the film's best performance.

Love Has Many Faces Quotes