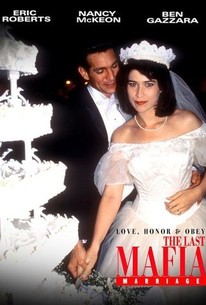 Made for television, the two-part, four-hour Love, Honor and Obey: The Last Mafia Marriage is the true story of "mob wife" Rosalie Profaci Bonanno, here played by Nancy McKeon. Inasmuch as the teleplay is based on Ms. Bonanno's memoirs, it is perhaps understandable that she casts herself as an innocent bystander in the ongoing saga of Mafia activity in the United States, totally ignorant (at least at first) as to how her father Joe Profaci (Tomas Milian) and his chief mob rival Joseph Bonanno (Ben Gazzara) support themselves and their families. It is further suggested that Rosalie is completely in the dark concerning the mob connections of her husband Bill (Eric Roberts), Joe Bonanno's son; after all, how could anything be amiss when the Pope Himself calls to congratulate the bride and groom? Ultimately Rosalie sees the light when her husband enters a war against opposing mob families, and is subsequently thrown in prison. The rest of the story chronicles how Rosalie struggles to escape the onus of "Mafia princess", seeking out honest, mainstream work to take care of herself and her children. Love, Honor and Obey: The Last Mafia Marriage originally aired Mary 23 and 25, 1993 on CBS.

Former Facts of Lifer McKeon sheds her girlish image; she's now an adult and her acting has matured.

There are no featured reviews for Love, Honor & Obey: The Last Mafia Marriage at this time.