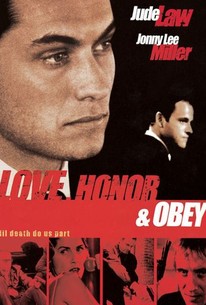 Following up on the critical drubbing of the Final Cut, the same cast and crew, TV comedians Dominic Anciano and Ray Burdis, along with Britpack hipsters Jonny Lee Miller, Jude Law, Rhys Ifans, and Sadie Frost, come together to make this crime comedy about guns, karaoke, and fart jokes. The film opens with bored postman Jonny (Lee Miller) in clown-face reminiscing about his mate Jude (Law), who introduced him to his crime lord uncle Ray Kreed (Ray Winstone). Though Jonny is hungry for some action, Ray is more interested in karaoke and his impeding nuptials with soap star Sadie (Frost). Bored, Jonny, along with Jude, bungle a credit card scam and then later really screw up by robbing high-grade blow from a South London gang headed by Sean (Sean Pertwee) and his sidekick Matthew (Ifans). Soon a gang war ensues.

Such a complete waste of time it seems appropriate to write a eulogy to the dear departed British crime caper.

A bizarre mixture of brutal violence and whimsical farce.

The entire shebang rapidly deteriorates into a series of gags about flatulence and Viagra.

What were they thinking?

It still manages to build towards a strong, impressive ending.

As a self-congratulatory exercise, Love Honour and Obey is perhaps without equal.

[A]n absurdist Mob comedy that's like The Sopranos with an English accent... and karaoke.

...suffers from just the sort of overindulgence that is sometimes associated with people who direct their own material.

The scriptwriters walk the fine line between comedy and drama with varying degrees of success.

Love, Honour and Obey feels more like a home video that some kids cooked up in their backyard.

I really thought this was an extremely fun movie. It's very much in the same reign of Guy Ritchie's British crime films. It was an excellent blend of comedy and drama, with a ton of street-wise characters. There was a lot of great acting, especially from Ray Winstone and Jude Law.

Slightly corny, low budget English film and one I have watched so many times, a comedy slant on London Gangster's brought to you by an all star British cast. With music by Oasis and various comical kareoke songs, this film will have you laughing and wincing at the same time, my favourite watch over and over type of film.

I haven't seen many british gangster films, yet it seemed a little run of the mill, save for some arty flourishes. All the main actors were pretty good ones and they did their parts well. The editing wasn't great through, and it wasn't that it was bad it was just certain aspects that hurt the pacing quite some. It's still a good flick and I didn't feel like my time was wasted.