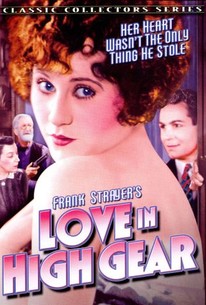 Harrison Ford (the original silent era Harrison Ford) and 1924 WAMPAS Baby Star Alberta Vaughn starred in this comedy-thriller from low-budget Mayfair Pictures Corp. When fussy Ronald Courtney (Tyrell Davis) spots his fiancée, Betty (Vaughn), winking at Donald Ransome (Ford) at a friend's wedding, he demands that they get married that very night. While dumb detective Duffy (Fred Kelsey) is chatting up Marie, the French maid, someone steals a valuable diamond. Duffy demands the gates locked, but Ronald manages to get out. The thief, Donald, manages to smuggle the gem out in a suitcase belonging to Betty, who then heads upstate for her wedding to Ronald. Everybody, including Ronald's weird relatives (Ethel Wales and Arthur Hoyt), ends up at the Peak Inn, where a game of "who's got the diamond" begins. After plenty of traffic up and down stairscases and in and out of closets, Donald, who was only returning the diamond to a friend, is reunited with his highborn girlfriend (Nanette Vallon), while Ronald and Betty are finally able to get on with their nuptials.

There are no critic reviews yet for Love in High Gear. Keep checking Rotten Tomatoes for updates!

There are no featured reviews for Love in High Gear at this time.