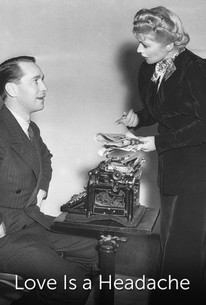 Love is a Headache Photos

Love may be a headache, but without it, how would MGM programmers like this one ever have been made? Franchot Tone is cast as Winchellesque radio commentator Peter Lawrence, who becomes the unexpected savior of fading Broadway favorite Carlotta Lee (Gladys George). Suffering from a string of bad plays, Carlotta is vaunted back to public favor when she decides to adopt two orphans (Mickey Rooney and Virginia Weidler), a bit of "heart interest" exploited by the fast-talking Lawrence. Trouble is, Carlotta can't stand children and has only adopted the tykes for publicity purposes. This puts the kibosh on the blossoming romance between the actress and the commentator, and it takes a comic-opera kidnapping plot to set things right. Ted Healy, mentor of the Three Stooges, made one of his last screen appearances in Love is a Headache, which was released several months after Healy's death. ~ Hal Erickson, Rovi

Critic Reviews for Love is a Headache

Love is a Headache hardly seems worth [Gladys George's] time - or yours and mine.

There are no featured reviews for Love is a Headache at this time.

Love is a Headache Quotes