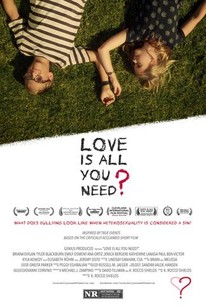 A straight love story in a gay world. Love Is All You Need? is football love story set in a world where the social norm is reversed: homosexuality is mainstream and heterosexuality is taboo. Although the norms are reversed, this film is inspired by true events. The story unfolds in a small Indiana town that is rocked to its core when Jude, (Briana Evigan) the star quarterback of the local university strikes up a forbidden love affair with a Ryan, (Tyler Blackburn) a sports journalism major. When the couple is outed by Jude's girlfriend (Emily Osment) the community's powerful religious leader (Elisabeth Röhm) begins a vitriolic crusade from the pulpit against all heterosexuals setting off a series of catastrophic events in lives of an 11 year old girl (Kyla Kennedy), experiencing her first crush on a boy and a teacher (Jeremy Sisto) who tries to teach his students about tolerance. The feature film is based on the 19 minute short film of the same name, which organically garnered over 50 million views and was self-translated by fans into more than a dozen languages, deeply touching and affecting people around the world.

Critic Reviews for Love Is All You Need?

Better to revisit such related films as "Boys Don't Cry" or TV's "The Matthew Shepard Story" for a more persuasive look at a topic that demands clarity more than gimmickry.

An expansion of her short film by the same title, Love Is All You Need? is an intriguing and very personal look at what it feels like to be persecuted for what you look like, who you are, and whom you love.

Audience Reviews for Love Is All You Need?

There are no featured audience reviews yet. Click the link below to see what others say about Love Is All You Need?!

Love Is All You Need? Quotes