Love Is Colder Than Death1969 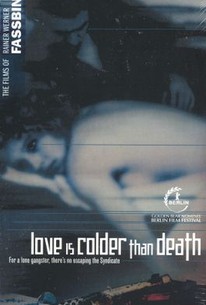 Love Is Colder Than Death Photos

An independent criminal's work is admired by organized crime. He is tortured after he refuses the invitation to join the gang but later relents and becomes a member. He continues to be a pimp and a murderer in this disturbing film that appeared at the Berlin Film Festival in 1969. This feature garnered international recognition for writer/director Rainer Werner Fassbinder who would go on to become one of Germany's most prolific directors of the post-World War II era.

Critic Reviews for Love Is Colder Than Death

Love Is Colder Than Death is heavily abstracted, with the characters more like models in a fashion layout than people in a story.

The makings of a powerful filmmaker are clearly in evidence.

These disquieting moments evoke a strange and complex sexual relationship between the film's characters bound to end in ravishing betrayals.

An unabashed and unrestrained ode to cinema penned by a young man who would become one of its greatest artists.

Flouting conventional wisdom, Fassbinder stages scene after scene against a blank white wall as characters shuffle back and forth and almost disappear into the blinding haze.

The attitudinizing New Wave thriller is turned into narcotized tableaux

This film is too stylized and protracted to interest the average crime-movie fan. It's recommended only for Fassbinder completists.

the least eventful crime movie ever

Audience Reviews for Love Is Colder Than Death

An interesting debut but ultimately a tad bland.

fassbinder's first feature gets off to a difficult start showing perhaps a bit too much of his roots in experimental theater. however i was soon hooked into it's existential gangster narrative, with fassbinder himself playing a tough guy in his favorite leather jacket. the bank heist at the end seems almost an afterthought. a kind of deconstruction of godard's 'bande à part'

Fassbinder's austere & stark debut, Feel the coldness & the blankness & of course beware of a jealous whore!! I actually liked this a bit better than Godard's Breathless

Love Is Colder Than Death Quotes