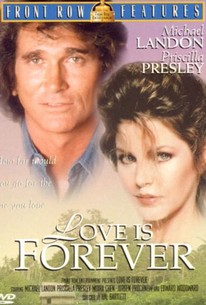 When producer/star Michael Landon took on this project, it was geared for theatrical release under the title Comeback. Innumerable production difficulties later (due in great part to Landon's tiltings with the writer and director), the film was retooled as a TV movie titled Love is Forever. TV turned out to be the ideal medium for this film, which despite its "epic" aspirations is at base a Prime Time soap opera. Landon plays real-life journalist John Everingham, who while stationed in Laos in 1977 is accused of being a spy, tortured, and expelled from the country. One year later, Everingham attempts to return to the Communist-controlled country in order to rescue the Laotian woman (Moira Chen) that he loves. The plan is to swim across the Mekong river without attracting attention. Much of the film's potential for suspense is minimized by its flashback structure. Too, much of the credibility is lessened by supporting actor Jurgen Prochnow's "Boris Badenov" portrayal of a Communist espionage agent. Edward Woodward costars as Landon's scuba instructor, while Priscilla Presley makes her TV-movie debut as a friend of Woodward's. Though Landon tried to quell the fact in the publicity packets, leading lady Moira Chen is also known as porn actress Laura Gemser. Originally running 150 minutes, Love Is Forever was cut to 127 minutes for its first telecast on April 3, 1983, then was further snipped to 100 minutes for syndication.

Critic Reviews for Love Is Forever

There are no critic reviews yet for Love Is Forever. Keep checking Rotten Tomatoes for updates!

Audience Reviews for Love Is Forever

There are no featured audience reviews yet. Click the link below to see what others say about Love Is Forever!