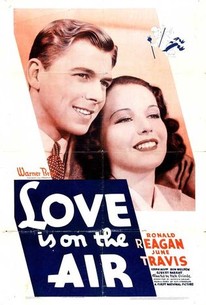 Love Is on the Air Photos

The first of three remakes of the 1933 Paul Muni picture Hi, Nellie, Love is on the Air is historically important as the screen debut of Ronald Reagan. In the original Hi, Nellie, a Winchellesque newspaper reporter is demoted to writing the "advice to the lovelorn" column when he steps on too many important toes. In the remake, reckless radio commentator Andy McLeod (Reagan) gets into hot water when he attacks a corrupt city government (a portent for the future, perhaps?), whereupon his boss disciplines McLeod by forcing him to host an innocuous kiddie program. While advising his youthful audience to eat their spinach and drink their milk, our hero manages to dig up enough dirt to expose the crooks once and for all. In his maiden film effort, Ronald Reagan is pretty good, though some distance removed from The Great Communicator.

George A. Billings
as Pee-Wee

Julia Ellen Perkins
as Another Girl

Cliff Saum
as Cop
View All

Critic Reviews for Love Is on the Air

There are no critic reviews yet for Love Is on the Air. Keep checking Rotten Tomatoes for updates!

There are no featured reviews for Love Is on the Air at this time.

Love Is on the Air Quotes