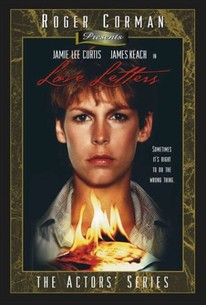 Unmarried disc jockey Jamie Lee Curtis happens across a packet of love letters, written by her late mother. As she peruses these missives, she learns that her mother had carried on a lengthy extramarital affair. At firt appalled by mom's "double life," Curtis is slowly brought around to another way of thinking. Soon she has embarked on her own romance with an older man, the very married James Keach. Well cast and sensitively directed, Love Letters is a purposely "small" film that deserves a larger audience. The film was also released as My Love Letters and Passion Play.

There are no critic reviews yet for Love Letters. Keep checking Rotten Tomatoes for updates!

There are no featured audience reviews yet. Click the link below to see what others say about Love Letters!