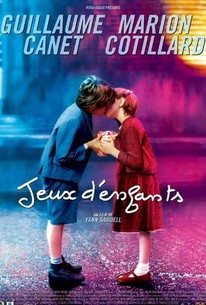 Critics Consensus: The romantic leads are too obnoxious and self-centered to generate interest or sympathy.

Critics Consensus: The romantic leads are too obnoxious and self-centered to generate interest or sympathy.

Critic Consensus: The romantic leads are too obnoxious and self-centered to generate interest or sympathy.

Love Me if You Dare Videos

Love Me if You Dare Photos

Part romantic comedy and part black comedy, director Yann Samuell's 2003 feature film debut Jeux d'Enfants (Love Me if You Dare) follows the exploits of two young would-be lovers as they go from childhood to adulthood with themselves as the greatest hurdle to their own happiness. Julien and Sophie first meet at the age of eight when both are undergoing great trauma: Julien is watching his mother die and Sophie has become the focus of intense hazing at the hands of some fellow schoolmates. On one fateful day, Julien decides to stick up for Sophie and pulls a practical joke on her tormentors. Henceforth, the two embark on a close friendship that revolves around daring each other to pull increasingly audacious practical jokes, rather than on the seemingly obvious intimate relationship they seem dangerously close to discovering at any moment. Jeux d'Enfants was selected for inclusion into the 2003 Toronto International Film Festival as well as that same year's Telluride International Film Festival.

Christophe Rossignon
as Doctor No. 2

Emmanuel LeMire
as Doctor No. 1

Critic Reviews for Love Me if You Dare

For his feature film debut, director Yann Samuell mainlines into Amelie for inspiration but can scarcely muster a contact high.

Movie characters don't have to be nice, but they do need to be interesting. Nastiness without intrigue translates, in whatever language, to 'annoying.'

Samuell's naivety and inexperience lead to this being an uncomfortable, if intriguing, mess.

Love Me If You Dare is far from everybody's cup of latte, but for those willing to take that dare, it has plenty to chew on.

Melds the magic of childhood memories with the pain of unrequited love.

Provides an enjoyable ride, even if style wins out over substance.

What a wonderful and demented love story!

It twinkles itself right into a rubber room.

Has a gimmicky, inventive style like Amelie, but the comedy has a very nasty edge.

The dreamlike amber washes and comic visual asides stress the otherness of the pair's reality, but seem to offer a limp excuse for their deluded exemption from empathy.

Love Me If You Dare presents a...cynical and often downright cruel perspective on relationships, though the film's bubbly look keeps it from becoming too dark.

Entertaining and appalling at once, an exercise in aesthetics that replaces the traditional unities with paradox, irony and cynicism.

Audience Reviews for Love Me if You Dare

Artsy fartsy French film...never could get into this kind too much.

Not only is every scene between mother and son hideously corny and sentimental, but it is almost impossible to put up with two sociopaths so utterly immature, disgusting and loathsome amid conflicts that are all childish, irritating and artificial.

Juvenile and selfish, Love Me If You Dare dares to entertain in an appalling manner depicting an affair adulterated by irrationality, irresponsibility, and immaturity. Inspired by Amélie in cinematic behavior and approach, Love Me If You Dare is an intriguing confusion communicating offensive and embarrassing messages aggravated by improper humor.

I stopped watching this halfway through and, you know what, I don't feel even remotely bad about it. 2011 is too short to be spending with fictional douchebags!

Love Me if You Dare Quotes