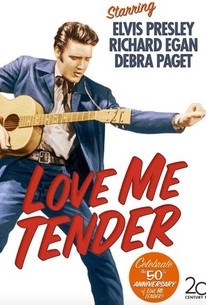 Elvis Presley made his motion picture debut in the Civil War drama Love Me Tender. Elvis, however, is not the star of the proceedings: that honor goes jointly to Richard Egan and Debra Paget. The story concerns three brothers--Egan, William Campbell and James Drury--who steal a Union payroll on behalf of the Confederacy, only to discover that the war is over and that they're now technically outlaws. Rather than return the money, the brothers divvy it up amongst themselves. Upon returning home, Egan discovers that his sweetheart (Debra Paget) has married Elvis, his youngest brother. Since Love Me Tender has been played incessantly on TV since the early 1960s, it is giving away nothing to reveal that the film is one of two in which Elvis Presley's character dies at the end. Naturally, Elvis is afforded plenty of opportunities to sing: the scene in which he launches into an anachronistic hip-swivelling performance at a county fair is one of the high points of mid-1950s kitsch. ~ Hal Erickson, Rovi

Mildred Dunnock
as The Mother

Jerry Sheldon
as Conductor
View All

Critic Reviews for Love Me Tender

[Elvis Presley] has all the emotions that he has heretofore expressed merely with larynx and pelvis.

Without The King, Love Me Tender is a decent horse opera that has more stand-and-talk moments than shoot-'em-ups....But Elvis really does add interest.

Elvis's debut film and only time billed as a supporting actor.

one of Elvis' most compelling works, despite a forced, artificial ending.

Elvis' debut in movies, and not a bad production. Set in Civil War with nice title song.

...in the long run of things, his performance transcends the material.

Audience Reviews for Love Me Tender

This is Elvis' first movie, so if you're a fan you wont want to miss it. I saw it a long time ago, so I don't remember it very well, but I do remember liking it. I'll have to see it again.