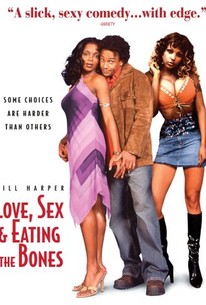 Canadian writer/director Sudz Sutherland makes his feature debut with the romantic comedy Love, Sex & Eating the Bones. Hill Harper plays Michael, a Toronto security guard who wants to be a photographer. He spends most of his time at an adult movie store called Pornocopia, renting videos starring Lisette (Marieka Weathered). One day in a laundromat, he meets young urban professional Jasmine (Marlyne N. Afflack), who has been celibate for some time. After a few dates, Michael finds out that his little porn habit has caused him to fear actual sex with another person. Love, Sex & Eating the Bones was shown at the 2003 Toronto Film Festival. ~ Andrea LeVasseur, Rovi

Ed Robertson
as Kennedy
View All

[Sutherland] never quite balances the darkness attending Michael's problem with the sunshine glowing everywhere else.

Sutherland's artful trick is to stick a serious tension -- sex objects versus love subjects -- into a genre flick without losing his balance, without sacrificing either the comedic levity or the thematic weight.

The keyword here is 'unimportant'. Not that every film released has to be important, but they should at least try to be worth the ticket price.

To describe it simply by its plot is to fail to do justice to its sass and its smart, goodhearted take on sexuality and relationships.

Quirky in a typically Canadian way, the film is a romantic comedy that almost manages to overcome the inherent conventions of the genre.

When it's not being juvenile, the film has some interesting things to say about love and sex. Hill Harper shines in a challenging role.

There are no featured audience reviews yet. Click the link below to see what others say about Love, Sex & Eating the Bones!