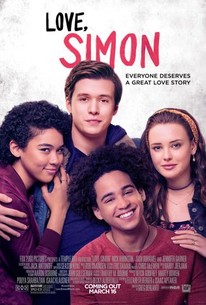 Critics Consensus: Love, Simon hits its coming-of-age beats more deftly than many entries in this well-traveled genre -- and represents an overdue, if not entirely successful, milestone of inclusion.

Critics Consensus: Love, Simon hits its coming-of-age beats more deftly than many entries in this well-traveled genre -- and represents an overdue, if not entirely successful, milestone of inclusion.

Critic Consensus: Love, Simon hits its coming-of-age beats more deftly than many entries in this well-traveled genre -- and represents an overdue, if not entirely successful, milestone of inclusion.

Everyone deserves a great love story. But for seventeen-year old Simon Spier it's a little more complicated: he's yet to tell his family or friends he's gay and he doesn't actually know the identity of the anonymous classmate he's fallen for online. Resolving both issues proves hilarious, terrifying and life-changing. Directed by Greg Berlanti (Riverdale, The Flash, Supergirl), written by Isaac Aptaker & Elizabeth Berger (This is Us), and based on Becky Albertalli's acclaimed novel, LOVE, SIMON is a funny and heartfelt coming-of-age story about the thrilling ride of finding yourself and falling in love.

Cassady McClincy
as Jackie
View All

Love, Simon works because it feels like a love letter to a specific queer internet borne of staying up late, sweaty and paranoid, on the family computer.

This beguiling romantic comedy offers a fresh take on the familiar premise of a high-schooler trying to fit in.

The film is a landmark in LGBTQ representation, but succeeds on its own merits.

Sweet and moving as it often manages to be, the film is comfortingly average, in its way - the point of it not to stand out, but fit in.

It's highly unlikely you'll read a review of this film that doesn't contain the word "adorable". It's equally unlikely that you'll be able to watch it without grinning from ear to ear.

The high school teen romcom is reborn for 2018. Funny, sentimental and smart: John Hughes would be proud.

A timeless teen comedy that could not be more inclusive, diverse or air-punchingly, smile-inducing saccharine feel-good mulch with heart. And a giant beating heart at that.

Strolls in confidently like it's been here before, telling a story that's been told plenty of times before, just not like this, and rarely this well.

I hate Martin so much but everything else is really good

This movie's biggest strength is its heart and emotional moments, both of which are extremely genuine and impactful.

Love, Simon is not only an adorable high school rom-com but also made history as the first major Hollywood studio film about a gay teenage romance.

Nicole Ackman
In Their Own League
View All Critic Reviews (239)

One of the better teen movies I have seen lately. Sweet, funny, light, even with it's difficult theme. I could see myself rewatching this at some point.

The impression one gets while watching this movie is that everyone tried too hard to make it as adorable as possible, but it doesn't even care to avoid the most basic romcom clichés, especially in its third act when things become too sappy, silly and contrived.

A sweet coming out story that normalizes being gay, however, hits some standard beats in the coming-of-age genre and occasionally forces sentimentality upon its subjects. The representation and joy the film depicts makes up for its overall lack of nuance. Let there be more pictures like Love, Simon, and hopefully in the future, add some subtlety. What we have now, though is a film that could ease the pain of many teenagers and those who see themselves in Simon's plight, and help them accept who they are. Rating: 71