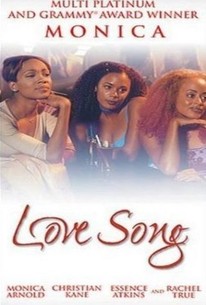 Recording artist Monica Arnold stars in this made-for-cable drama as African-American pre-med student Camille Livingston. Having been carefully raised in the lap of privilege and luxury by her wealthy, "mixed" parents, Camille is fully prepared to make her doctor father's dream come true by following in his footsteps. She is also resigned to wed a "safe" young man, fellow student Calvin (Rainbow Francks), at her parents' behest. All of this changes when she falls head over heels in love with college drop-out Billy Ryan Gallo (Christian Kane), a struggling young jazz musician. Filmed in Montreal, Love Song was first broadcast over MTV on December 1, 2000.

There are no critic reviews yet for Love Song. Keep checking Rotten Tomatoes for updates!

There are no featured reviews for Love Song at this time.