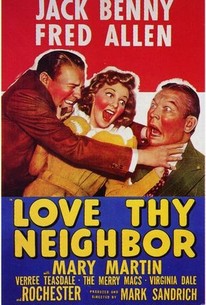 Love Thy Neighbor was produced to capitalize on the famous radio feud between comedians Jack Benny and Fred Allen. The two stars (actually friends in real life) play "themselves," constantly at each other's throats due to real and imagined slights. Benny complicates matters by falling in love with Allen's niece, played by Mary Martin. The battling comics briefly patch up their differences when Benny rescues Allen from an out of control motorboat, but the truce doesn't last long. The final scene takes place during a musical revue starring Benny, which Allen tries to break up with a slingshot. The Benny-Allen feud was already old news by the time of Love Thy Neighbor, and the film is merely an uninspired attenuation of a threadbare premise. The result is a letdown for fans of both Jack Benny and Fred Allen--though there are a handful of genuinely funny one-liners, as well as adroit supporting contributions from Mary Martin and Eddie "Rochester" Anderson. The best scene in Love Thy Neighbor is the animated opening-credits sequence, produced by Warner Bros.' "Looney Tunes" mentor Leon Schlesinger.

Judd McMichael
as The Merry Macs

Helena Carroll
as The Merry Macs

Critic Reviews for Love Thy Neighbor

There are no critic reviews yet for Love Thy Neighbor. Keep checking Rotten Tomatoes for updates!

Audience Reviews for Love Thy Neighbor

There are no featured audience reviews yet. Click the link below to see what others say about Love Thy Neighbor!