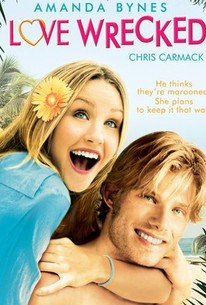 Lovewrecked tells the story of Jenny (Amanda Bynes), an eighteen year-old girl who is ecstatic when she finds that her favorite rock star, Jason (Chris Carmack), is a guest at the tropical resort where she is working for the summer. When Jason falls off a cruise ship, Jenny dives in to save him, and the two raft their way onto a nearby "desert island" -- actually just a stone's throw from a luxury resort. However, Jenny wants to spend some time alone with Jason, so she lets him continue to believe that they are desperate castaways-- at least for now. Things get even more complicated when Jenny's rival Alexis (Jamie-Lynn DiScala) pretends to be shipwrecked too, and they both compete for Jason's affections. When Jenny's plan blows up in her face, her lifelong friend Ryan (Jonathan Bennett) is there to pick up the pieces.... -- (C) Media 8 Entertainment

...a low-rent comedic misfire that seems to have been geared exclusively towards teenaged girls.

Bynes has made far better films, even though they're unilaterally targeted at the teenybopper crowd

Lovewrecked seems like such innocent fun until it starts to grind on your nerves as the tale drains of excitement and Bynes's batteries begin to wear down.

Yes, it's ridiculous, but the teen girl in me just loves the story of the girl "stranded" with her rock star crush (even if he is a bit of an idiot) and the resort scenery is beautiful. Amanda had a wide eyed, innocent appeal here, her teen movies are one of my guilty pleasures. Just a sweet fun movie that you don't necessarily need to be 15 to enjoy!

And for the record I really really dislike Bynes

I love Amanda Bynes, but this...this is just unconscionable.