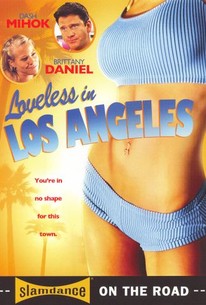 A reality television producer whose handsome exterior is only exceeded by his cruel cynicism reconnects with the one woman who may have the power to cure him of his womanizing ways in director Archie Gips' blistering romantic comedy. Dave Randall (Dash Mihok) used to be a great guy, but then he moved to Los Angeles and began working in the television industry. These days the one-time charmer has officially become world-class heel. A bed-hopping barfly whose constant quest for casual sex steadily corroded his soul, Dave is fortunate enough to get a second shot at love when the only women he ever truly cared about suddenly wanders back into his life. Now only time will tell if there's still a nice guy buried somewhere beneath Dave's boorish exterior.

There are no critic reviews yet for Loveless in Los Angeles. Keep checking Rotten Tomatoes for updates!

So this is one of those movies where you bite and choke through the first ten minutes, and you cant muster up a single thought. and its just like, "Really? this was created by.. humans?" And Brittany Daniel.... holy hell, what happened to your days of turning in amazing performances in countless hollywood blockbusters like Joe Dirt and Club Dread? shame, shame. And Dash Mihok went from being the next Punisher to starring in straight-to-comedy central puke-fest in like, less than two years.