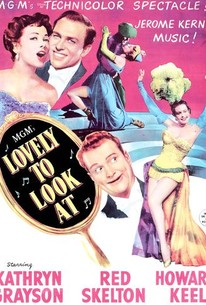 Lovely to Look At Photos

The reason the 1935 Astaire/Rogers film version of Roberta was unavailable for years was that, in 1952, MGM bought the property and refilmed it under the title Lovely to Look At. Inheriting one-half of a Parisian dress salon from his late aunt, Red Skelton travels to France with his showbiz friends Howard Keel and Gower Champion. The threesome hopes to convince the owners of the other half of the salon to sell their share so that Skelton, Keel and Champion can finance a Broadway show. Meeting Skelton's "partners" Kathryn Grayson and Marge Champion, the three Americans discover that the salon is all but broke, so they pool their resources and wits to make the establishment a winning proposition. The plot thickens as more and more characters are added to the storyline, including stagestruck gendarme Kurt Kaznar and chorus girl Ann Miller. Songs retained from the original Jerome Kern Broadway score for Roberta include "Smoke Gets In Your Eyes," "I Won't Dance" and, of course, "Lovely to Look At."

Diane Cassidy
as Diane
View All

Critic Reviews for Lovely to Look At

Like most old musicals, this one doesn't have much of a plot. But fortunately .the plot is subordinated to eye and ear appeal.

A big-budget lush Technicolor remake of the 1933 Broadway musical Roberta.

Though containing some popular tunes, this mediocre movie musical is stiffly directed by Mervyn LeRoy and poorly acted.

Audience Reviews for Lovely to Look At

Some great songs and excellent production values but missing that spark that takes a good film to a great one. Ann Miller has a lightness that the rest of the cast doesn't, for some reason she only dances once not utilizing her greatest asset. Her one number is a knockout though.

Lovely to Look At Quotes