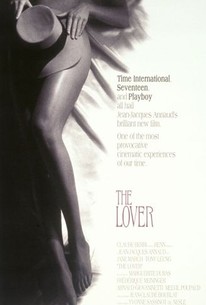 The Lover is director Jean-Jacques Annaud's adaptation of Marguerite Duras' minimalist 1984 novel. Set in French Indochina in 1929, the film explores the erotic charge of forbidden love. Jane March plays a French teenager sent to a Saigon boarding school, while Tony Leung is a 32-year Chinese aristocrat. They look at each and they both see a blinding white flash; it's kismet. He offers her a ride in his limousine and soon they meet in his "bachelor room" where they revel in a wide variety of creative sexual encounters. However, they both realize their love is doomed. She comes from a troubled family that includes a mentally-disturbed mother (Frederique Meininger) and drug-addicted brother (Arnaud Giovaninetti). It also appears that her family would not approve of an interracial tryst. But then neither would his family, since in order to inherit his father's wealth, he must not break from a traditional Chinese arranged marriage.

Jane March
as The Young Girl

Do Minh-vien
as Young Boy

Jeanne Moreau
as Narrator
View All

Critic Reviews for The Lover (L'amant)

The Lover's rarefied sensibility takes getting used to; once its spell is cast, you won't want to blink.

Undercut by an air of self-congratulatory pomposity that the film is way too insubstantial to support.

The abundant sex - soft-core and tasteful - and the splendid sets make up for the film's banal style.

It's tough, clear-eyed, utterly unsentimental, produced lavishly but with such discipline that the exotic locale never gets in the way of the minutely detailed drama at the center.

Scratch away the steamy, evocative surface, remove Jeanne Moreau's veteran-voiced narration, and you have only art-film banalities.

The most fascinating character in JeanJacques Annaud's film of the novel by Marguerite Duras is Vietnam, long before the terrible and futile war.

Too bad that the film is marred by the vices of international productions, as it deals with issues seldom shown in American movies, such as the power of sexuality.

Stylish if somewhat tedious study of a young Vietnamese woman who falls under the spell of an older dandy.

The worst part of the dialog is given to the writer. She has to say one pedantic line after another, and overall, the narrator's part is just too wordy.

The only moderately interesting scene here is a traditional Chinese wedding toward the end, which, of course, is cut short.

Audience Reviews for The Lover (L'amant)

On the whole, L'amant strikes me as aloof and disconnected. It has aspirations of being elevated and artsy but offers no reason for empathy or audience connection with the characters. In the end I didn't really care whether or not the two lovers stayed together or parted ways. A beautiful but rather hollow film.

This movie is set in 1920s Saigon. On a chance encounter on a ferry crossing a rich Chinese man in his 30s meets a French school girl. They start an affair. He loves her but she seems to stay with him for his money as her family are poor. He wants to marry her but is forbidden because of their race and his father has planned an arranged marriage for him. She leaves for France but he never forgets her. Movie content is a little uneasy at times. Also sexually explicit.

Another great Annaud oeuvre. I love the book and this film was very faithful to Marguerite Duras's wonderful, evocative narration. I was very skeptical because so much of Duras's sad, beautiful work is often too abstract, contradictory, ambiguous, and yet Annaud did manage to make episodes linear, comprehensible, but not trivial. There's still so much properly left unsaid about the relationship of a 15 year old French girl and a 32 year old Chinese man. It was quite a relief, actually, to have so much vague, fascinating content put in images, and feelings incarnated in real people. Jeanne Moreau's voice was exactly the type of voice I wanted to hear in an adaptation of L'Amant. Contained, breathy, grave. Tony Leung Ka Fai was also, quite honestly, an accurate choice to play the lovesick man. His performance is one of the most captivating things about the movie, apart from the cinematography and the richness of the story itself. It was a very pleasant surprise, I didn't think I would like it. It's beautiful.

A portrayal of a relationship between a pubescent girl (Jane March is 18 but looks much younger) and an older Chinese guy. Besides the intense sex scenes, one of the images that stays with me is their make out apartment. It is in the middle of the city with all the noises of life going by just outside the shutters. You feel for them both.