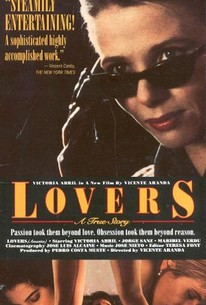 Vicente Aranda's Lovers is set in Spain, mostly in Madrid, during the 1950s. The story line is reminiscent of Theodore Dreiser's classic An American Tragedy (which was filmed as A Place in the Sun), wherein a passive, amoral, and shallow protagonist inadvertently destroys the lives of two women who love him. The handsome Paco (Jorge Sanz, who also starred in Belle Epoque and has been called "the Spanish Tom Cruise") is a young soldier involved with a virginal maid, Trini (Maribel Verdu of Y Tu Mama Tambien). Trini is saving her money and planning for their wedding, but Paco tells her not to worry, that he will find a job and save money for them. Paco leaves the army, but has trouble finding and keeping a steady job. He ends up renting a cheap room from Luisa (Spanish superstar Victoria Abril, best known for her work in Pedro Almodovar's films), a beautiful and mysterious widow. Before long, Luisa has seduced the sexually frustrated Paco, and involved him in her moneymaking scams. Trini quickly figures out what is going on, and makes a desperate effort to win back Paco's affection. Paco is obsessed with the sexually experienced and voracious older woman, but is unable to break off his long-term relationship with Trini. He attempts to string them both along, with disastrous results. The film was the first of veteran filmmaker Aranda to get a theatrical release in the United States, thanks largely to Abril's star power, and caused a minor sensation with its sexual explicitness, in particular the infamous "handkerchief scene."

Saturnino Garcia
as Man from village

Ricard Borrás
as Man in the bar

María Martín
as Girl in the village

Though well-executed, there's a disturbing emptiness to it that never makes it memorable or moving.

There are no featured audience reviews yet. Click the link below to see what others say about Lovers: A True Story (Amantes)!