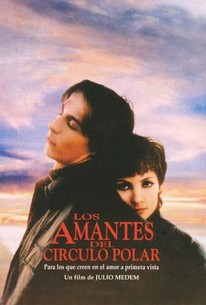 Julio Medem directed this romantic Spanish drama with location scenes in Finland. School children Ana (Sara Valiente) and Otto (Peru Medem) are brought together when a paper airplane flown from a window by Otto unites Ana's mother Olga (Maru Valdiviesio) with Otto's father Alvaro (Nancho Novo). After this encounter, Olga and Alvaro fall in love -- with the result that Alvaro leaves Otto's German mother Ula (Beate Jensen). To be near Ana, Otto begins living with Alvaro and Olga. Ana believes that Otto harbors the soul of her dead father. As adolescents, Otto (Fele Martinez) and Ana (Najwa Nimri) share a kiss over a book opened to a passage about the Arctic Circle, and they often sleep together. Otto is grief-stricken by the death of his mother -- partially due to his leaving her for Ana. Shown at 1998 film festivals (Venice, Toronto).

Peru Medem
as Otto as a Child

Sara Valiente
as Ana as a Child

Victor Hugo Oliveira
as Otto as a Teenager

Kristel Diaz
as Ana as a Teenager

Beate Jensen
as Ula
View All

The movie is about love -- or, rather, about their grand ideas of romance. It is comforting to think that we can love so powerfully that fate itself wheels and turns at the command of our souls.

Under the midnight sun. It's dreamy and weird.

...large swaths of The Lovers of the Arctic circle aren't quite as wholeheartedly engrossing or captivating as one might've hoped...

Its characters belong less to any recognizable social reality than to the obvious wheezings of an imagination that, having decided that Arctic Circle necessitates making the male lover a pilot, thinks it's clever to name the pilot Otto...

A triumphant exercise in style.

It's hard not to find the whole thing pretentious and obnoxious.

you're sure to fall in love with all three actresses that play the woman throughout her life.

I felt caught up in the film's magical spell despite the many reservations I had about it being manipulative.

Devotees of conceptual cinema will find plenty to enjoy in the director's ingenious tapestry of recurring motifs and symbols.

Told almost as a quirky love fable bathed in icy blue and full of the most poetic coincidences, this is an atypical romance that doesn't even let us notice how strangely hooked to these odd characters we become, hoping above all else that fate will bring them together in the end.

I had never heard of this movie or of Julio Medem, the Spanish director. I went to watch the movie without having any idea of what I was about to see. As I watched the first few minutes of the movie I started to get into it. I adored the characters of Ana and Otto as children. Otto and Ana became brother and sister because Otto's father married Ana's mother. Soon Ana and Otto began to sleep with each other and they fell in love.Things changed for Otto when his mother died. He left everything and everyone behind. He became a pilot for a mailing service. Ana decided to leave also and she went to live in Lapland, Finland. Otto and Ana ended up meeting here.The movie was full of twists and turns. It portrayed the way Ana saw life and the way Otto did.To Ana, life was full of coincidences, while Otto saw life as running in a circle. Overall, it was an enjoyable movie,

Freaking tantra.Ah yes,the herbs of amour and the joint of the sexes,mystical environments,Medem is a resident of mysterious communications.Ana-Otto,the train of one element.That of surreal expiation.

I think the less you know about the plot, the better. I am already a little sorry that I'd read about it so much before watching it, but since a slight outline is necessary I'll put it like this: Otto and Ana's lives are doomed to follow a circle. Begin it and close it. Their love is so beautiful and perfect that it can't but follow the same scheme: begin with a casualty and end with one, begin with intensity and end with it.

The story is told from the points of view of both characters throughout their infancy, adolescence, and adulthood. Their communication is silent, they understand each other entirely, and they love each other in secret. Casualty dominates their fates, and so casualty after casualty leads them to find each other, grow apart, and find each other again, until it takes them to the Arctic Circle for the closing of their circle. It sounds a little cheesy, but it's nothing like that: the film is sublime, the romance is subtle and hushed. The intensity is in the longing, and how. Otto and Ana are lost without each other. They live in accordance to where their love takes them.

Julio Medem relies heavily on casualty to explain the events, which gives the film fairytale tones. Still, the mysticism doesn't obstruct the purity of the story. Also, the narrative structure is not lineal: we go from adulthood to childhood in seconds, one event is sometimes integrated into another. Medem blurs the lines between hope, dream, and reality, to a brilliant outcome.

Finally, all actors are simply excellent. All performances are without flaw. Fele Martinez and Nawja Nimri are simply perfect.

In short, the film is astonishing. The emotional involvement it brings (a few hours after I'd seen it, in my case) is without comparison. Even though it's rather cold, it's not antiseptic; we get the feeling we're being allowed to look through a hole in the wall, permission to take a peek into someone's own personal love story, which is why it seems isolated from us. Some things, thoughts, we're not allowed to know, but we can guess. And all of this happens to take place in a wonderful world in which fate and love dance together. It's a real accomplishment, one of the loveliest films I have ever seen.