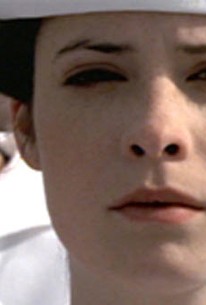 The small-screen melodrama Love's Deadly Triangle: The Texas Cadet Murder first premiered on Monday, February 10, 1997 on NBC, and now arrives on home video in this release, under the title Swearing Allegiance. The picture dramatizes the infamous Zamora-Graham 'crime of passion' that unfolded in Fort Worth, Texas in 1995, whereby teen lovers (and soon-to-be naval cadets) Diane Zamora and David Graham viciously murdered Adrianne Jones, a local girl to whom Graham had given himself sexually. The incident inspired numerous articles including a September 1996 New York Times piece by Sam Howe Verhovek, and the cover story of the December 1996 Texas Monthly. The telemovie opens with Jones's body discovered beside a road, dead from gunshots to the head and several blows with a blunt object. The police question numerous suspects, before landing on the two culprits: Zamora (played by Holly Marie Combs) and Graham (portrayed by David Lipper). At the time of the arrest, Zamora and Graham are enrolled, respectively, in the U.S. Naval Academy and the U.S. Air Force Academy. E.T. mom Dee Wallace Stone co-stars as Jones's mother; Richard A. Colla directs, from a script by Steve Johnson.

There are no critic reviews yet for Love's Deadly Triangle: The Texas Cadet Murder. Keep checking Rotten Tomatoes for updates!

There are no featured audience reviews yet. Click the link below to see what others say about Love's Deadly Triangle: The Texas Cadet Murder!