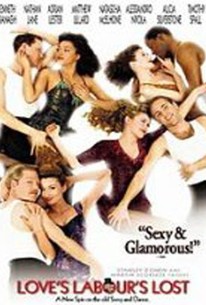 In 1939, the King of Navarre and his three best friends swear an oath to give up women for three years whilst devoting themselves to the study of philosophy. One of the terms of their pledge specifically prohibits women from their presence, but the arrival of the Princess of France and her three beautiful attendants on a diplomatic visit throws the plan into disarray. Is this a feasible feat for a man of the court? And what of the King? The men begin to pursue their desires unbeknownst to each other, acting in secret and concealing their passions. The mood is broken by the news of the death of the Princess's father and the girls return to France. In the meantime, France has fallen to the Nazis and the men must leave to fight for their countries. Before they leave, the heartbroken men dedicate their love and promise to remain faithful. The war will test the couples' devotion and therefore decide the fate of their futures together.

Alicia Silverstone
as The Princess

Alessandro Nivola
as The King

Amy Tez
as Sophie
View All

Broad and wildly uneven, this Labour teeters on the edge of the amateur. Yet it's hard not to root for its moonstruck spirit, or to succumb to the panache of the pastiche.

It may not be 'hip', but it's definitely enjoyable and it's a shame that there isn't more scope for genuine musical talents like Lester to utilise their gifts in modern cinema.

A luscious labor of love.

An act of double homage to antique artifice.

Maybe Kenneth Branagh should have left the Hollywood musical where he found it, back in the 1930s.

One might as well be watching Lawrence Welk reruns.

The play emerges as silly, redundant, odd. It doesn't really emerge at all.

A noble experiment that didn't quite work out.

We all know who's going to pair off with whom in the end, but Branagh does get us there in some considerable style.

Alicia Silverstone was better as Batgirl than in this piece of garbage. I don't think she even understood what she was saying.

Branagh takes one of Shakespeare's lesser-known plays and puts his own imaginative spin on the subject.

Devices meant to keep Shakespeare user-friendly instead reduce the story to a jumble.

Branagh's idea is to conjoin Shakespearean comedy with 1930's era Hollywood musicals ... what could go wrong? At first I felt as if I were having a tooth pulled, without novacaine. The performances? I remembered the Freudian nightmare of appearing in public naked and finally concluded the cast was far, far braver than I. By the finale it didn't hurt as bad ... but no one will be pleased with this. Only Nathan Lane manages to escape completely unscathed.

One of the kind of films that you wished you could love more than you actually do. Because they don't really do anything wrong. They take Shakespeare's play and put it into the 1930s musical era, with all the singing, dancing and water ballet that comes with it. The songs are more or less familiar, some performances really fun and good, others somewhat boring. The cast is great, only Matthew Lillard feels like the odd man out, the set pieces and design rather lovely. It's hard to say why the film didn't work for me anyway. Sometimes it was hard to keep track why things were happening the way they turned out, and I usually didn't have a problem with Shakespeare's language. I felt a bit let down after all, only the ending was rather sweet. I suppose it's one for Musical or Shakespeare fanatics, everyone else feel free to skip. Sadly.

Okay, so this Branagh go at Shakespeare may leave out a lot of the Bard's words, but the spirit is definitely there. Strictly speaking, in the classic sense, comedy does not necessarily equal ha-ha funny. To put it in truly simplistic terms, comedy has only to follow a certain path. With tragedy in the classic sense, there is the trajectory of rise and fall, whereas with comedy, there is fall and rise -- with or without yucks.

One need only compare Branagh's attempt with that of the BBC's complete dramatic works of Shakespeare attempt, to see that Branagh has infused the play with the proper spirit, the lively humor it should have. The BBC attempt is so droningly unpleasant -- although much truer to the text -- that it feels in the aftermath like a disheartening tragedy.

As I've said before, I hope Branagh does all of Shakespeare's plays before he blows out the candle. Every one of his productions breathes vibrant bright life into the plays, closer to the text or not. I think if Shakespeare saw this adaptation, he'd love it.

So bad, it's almost good...but then I regain consciousness and have to put on Singin' in the Rain to get that murky taste out of my brain.