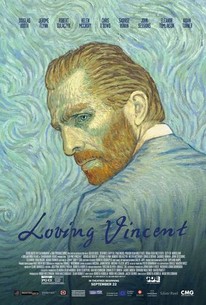 This feature-length painted animation -- the first film of its kind -- explores the life and unusual death of Vincent Van Gogh via depictions of his artworks. Directed by Dorota Kobiela and Hugh Welchman.

Aidan Turner
as Boatman
View All

As the colors shimmer and shake, we understand how the artist viewed the world, as not only static existence, but as vibrant action.

There is so much going on in every frame that it's hard to stop thinking long enough to become emotionally involved. But it hardly matters. This time it really is a case of art for art's sake.

The point of Van Gogh's style on the canvas was always its dynamism, its motility, so to see that style in motion is a curiously over-literal treat.

Loving Vincent may not be unique but it's very special.

"Loving Vincent" is almost too beautiful for its own good; I found myself, too often, so dazzled by the form that I quite forgot about the content.

Declamatory dialogue is a little too on the nose, but the animation is a mercurial wonder; a snaking, vibrant vision in the golds, ochres and cornflower blues that sing of the artist's most famous work.

Loving Vincent is so visually rich, even intoxicating, that you can just turn off your brain (and perhaps the soundtrack of voice actors) and experience full sensory overload watching the extraordinary animation craftsmanship at work.

On this aspect of van Gogh's life and on his social and aesthetic concerns, the film is weak. If Loving Vincent encourages people to investigate the painter's life and work, that is all to the good.

An animated film that moves and breathes and vibrates with life. It's a singular achievement that may come up short in the writing, but never lets us down as a visual feast.

Even though the storyline falters, I'd still watch it again. Maybe on mute with a solo piano soundtrack.

One can certainly appreciate the effort put into the making of Loving Vincent, but film is a different medium and requires a more holistic approach than just pretty pictures.

Overall, Loving Vincent comes across as a homage to the artist, and complemented by Clint Mansell's score, it is truly beguiling.

I wish they'd put half as much effort into the screenplay as they did the admittedly stunning animation. Hell, even jettisoning the plot might have been the better bet that way we could simply enjoy the imagery.

It will be definitely remembered for how it looks: absolutely gorgeous and unique like a Van Gogh painting in motion, that is for sure; yet the film's unimpressive Citizen-Kane-esque plot doesn't offer as much to match its incredible technical achievement, which is a pity.

Film critics tend to talk down on a film when it seems like the core idea of the film is a gimmick. Three-dimensional movies were the talk of the town about 10-15 years ago and have now become an annoyance to many. Loving Vincent is the newest film to try something new in terms of how it tells its story. Being completely painted by hand, this movie moves along as if it had been animated about 60 years ago. A more recent comparison would be to say it looks like A Scanner Darkly, but I truly feel this film's much more unique than even that. This is a wonderfully engaging premise and even without that aspect, here's why I believe everyone needs to see this film, even just based on the portraits alone. Loving Vincent tells the story of Armand, a young man who has been tasked with the devastating venture of delivering Vincent Van Gogh's final letter. Upon arrival of the town that Van Gogh ultimately met his untimely end, Armand finds himself incredibly interested in the mystery surrounding this death. Becoming more of an investigation film than a simple journey, Loving Vincent takes you on a ride that's full of insight and powerful moments between characters. I didn't think I would've been so moved by this movie, but the performances/voiceover work was truly astounding, sucking me right into this beautiful portrait of a film. It's one thing to commend this film for having truly breathtaking visuals, but that's also the understatement of the year. This movie blows away any animated film from last year in terms of being uniquely made. From the nods to Van Gogh's classic works, to the motion and dissolves between scenes, everything about this film felt seamless. That being said, there's a large obstacle that many viewers will have to get over as soon as the film begins as well, being the fact that it's entirely painted by hand. This wonderful aspect of the movie will definitely be off-putting to some, due to the fact that it's the first film of its kind and may be bizarre to look at. For myself, I found it absolutely fascinating, plain and simple. As someone who prefers other forms of art than paintings, I do admire a great piece of art, regardless of the medium. This movie explores a life that pretty much everyone has heard of at some point in time, and I must admit, I didn't know this story was as complex of a mystery as this movie suggests it is. From motivational speeches about life and the universe to questions brought up in a philosophical way, I was incredibly immersed in each and every one of the scenes throughout this film. There's hardly any downtime because every line of dialogue progresses this story forward at a rapid rate. In the end, Loving Vincent may not be for everyone, especially due to its unique look, but the story itself is something I believe everyone needs to see. There is a scene that closes out the movie that I still have playing over and over in my head. As I mentioned many times, this movie is filled with memorable lines of dialogue that truly makes you think about life itself and the universe surrounding us. This may seem biased and this particular reaction will surely not hit everyone the way it hit me, but I found this to be a remarkable picture. I fear this movie will go fairly unnoticed, which is a shame because literally, every aspect of this film is wondrous to behold. This is one of my favorite films of 2017.

A major effort in the making it must surely be an event to screen, 'Loving Vincent' is a fascinating and truly beautiful animated feature most stunningly of all is that the entire film, frame-by-frame is rotoscoped in the unique and stunning oil paint style of the late painter to tell a compelling, fascinating and heartwarming story about an investigation into the life of the posthumous master painter. Even with authentic settings and a cast of colourful character both figuratively and literally, the film is a hugely investing and outstandingly beautiful film to see, almost verging from the very dramatic plotting to the eye catching surrealist aspect of the art-house sphere this film is fixed within. While it's hard to determine whether or not the mystery of the late painter's death can be explained, especially alongside the historical accuracy aspect of this film, everything else about it from the initial premise alone is enough to recommend to all audiences young and old to experience even well before you could say 'Oscar for Best Animated Film' since the oil work paintings are it's signature look while the feel comes from the technical and written aspects alone. I wish I could give this my perfect grade though something inside me is doubting it figuratively especially along the lines of historical accuracy and overall sustenance.