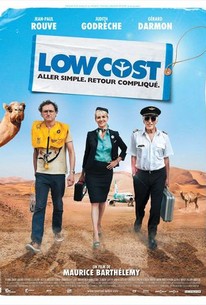 As written and directed by Maurice Barthélémy and adapted from a story by Hector Cabello Reyes, this farce stars Jean-Paul Rouve as Dagobert, a French industrial spy with a serious anxiety problem. He boards a cheap flight in Djerba, Tunisia, and endures a hellish eight-hour delay with the rest of the passengers as everyone waits patiently for the non-air conditioned plane to take off. Eventually, the crowd receives the infuriating news that the flight has been cancelled. Enraged, Dagobert tries to win the heart of the sexy airline stewardess, Nuance (Judith Godrèche) by starting a mutiny - and one of the passengers, clinically depressed ex-pilot Jean-Claude (Gérard Darmon), leads the way in taking control of the plane. This outing reunites Barthélémy and Rouve, both charter members of the popular French comedy troupe Les Robins des Bois since 1997.

There are no critic reviews yet for Low Cost. Keep checking Rotten Tomatoes for updates!

There are no featured reviews for Low Cost at this time.