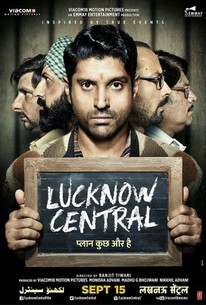 Kishen Mohan Girhotra (Farhan Akhtar) is a young man who belongs to Moradabad, a city in Uttar Pradesh. One fateful day, Kishen gets accused of murder which lands him in Lucknow Central Jail where he's awaiting his High Court trial for a death penalty. Gayatri Kashyap (Diana Penty), a diligent NGO worker, is compelled to form a "Band of Prisoners" for the band competition which is to be held in the dreaded jail of 'Lucknow Central' that year and this is how Kishen's and her paths cross. Kishen befriends four other inmates, namely Dikkat Ansari, Victor Chattopahdyay, Purushottam Pandit, Parminder Trehan and convinces them to join the band. The dramatic narrative of Lucknow Central portrays how Kishen's life progresses in jail and how music becomes an intricate part of not only his journey, but the rest of the band's as well.

It is the mawkish sentimentality which overcomes the story-telling. When it is not that, then we find our fine conspirators being much too dramatic.

The so-called "supporting" cast becomes the spine - Inaamulhaq, Dobriyal and Sharma in fine fettle here. The film also begins to get persuasive and involves you in exploring the duality between following your dream as against seeking freedom.

We know cause based films are the norm right now and maybe the idea behind the film was prison reform. It's heart was in the right place but everything else wasn't...

Ranjit Tiwari's debut feature coasts along on strong performances and a mostly absorbing, if overblown, plot.

Lucknow Central fails to utilise its resources, especially Diana Penty, and loses out on a chance to become a really engaging film. Like Prison Break, it never reaps the benefits of a promising start.

There are no featured reviews for Lucknow Central at this time.