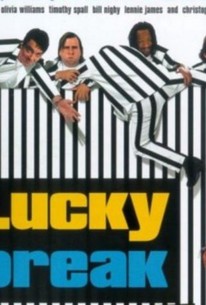 Critics Consensus: Lucky Break fails to do anything new with The Full Monty formula.

Critics Consensus: Lucky Break fails to do anything new with The Full Monty formula.

Critic Consensus: Lucky Break fails to do anything new with The Full Monty formula.

The first feature by director Peter Cattaneo since his award-winning British smash hit The Full Monty, Lucky Break is another comedy in the same mold, this time taking place in prison. Small-time crooks Jimmy (James Nesbitt) and Rudy (Lennie James), after years of no success, decide to pull a bank job, where they are both captured and incarcerated. Jimmy is then transferred to Long Rudford, run by the steely security chief Perry (Ron Cook). Jimmy again runs into Rudy (whom he left to take the initial rap) and shares a cell with Cliff (Timothy Spall), a portly man prone to depression. The prison warden, Mortimer (Christopher Plummer), is heavily into Broadway musicals and offers Jimmy an opportunity to stage his long-unproduced work, "Nelson: The Musical," which Jimmy will use as a means to bust out of the prison. After working hard on the new tuner, the boys try to find a way both to do the show and to continue their arduously planned escape. The Sixth Sense's Olivia Williams co-stars as a guard Jimmy falls for, and British comic actors Bill Nighy and Frank Harper appear in supporting roles.

The formulaic script, stocked with not one truly menacing inmate, echoes far too many sentimental post-Full Monty imports.

A prison comedy that never really busts out of its comfy little cell.

It's what the Brits themselves might call fair to middling.

A pleasing but routine British comedy set in an English prison.

While we can forgive Cattaneo for succumbing to temptation, we must also damn him and screenwriter Ronan Bennett (Face) for failing to attempt to improve on the original idea.

Well, this is definitely a disappointment.

If you adored The Full Monty so resoundingly that you're dying to see the same old thing in a tired old setting, then this should keep you reasonably entertained.

Overall, it's good, not great. This is a pleasant enough but small English romantic comedy.

The end result is like cold porridge with only the odd enjoyably chewy lump.

If The Full Monty was a freshman fluke, Lucky Break is [Cattaneo] sophomore slump.

...an adorably whimsical comedy that deserves more than a passing twinkle.

There are no featured audience reviews yet. Click the link below to see what others say about Lucky Break!