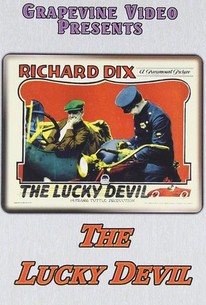 If the plot to this breezy romantic comedy sounds like something that would have starred the late Wallace Reid, there's a reason -- the story was penned by Byron Morgan, who wrote most of Reid's racing films. Dandy Farnan (Richard Dix) works in a department store demonstrating camping gear. He wins a racing car in a raffle, but he doesn't realize that the roadster was given up by the owner's son because he was convinced it was "hoodooed." True to form, the car starts causing trouble immediately. Farnan's bad luck continues when Doris McDee (Esther Ralston) and her aunt (Edna May Oliver) mistake him for the car's original owner and snub him. Nevertheless, Farnan is determined to enter a race to help Doris out financially. He has to fight it out with a pugilist to win the entry money. After a thrilling slapstick race, Farnan finally comes through a winner, both of the race and in love.

Edna May Oliver
as Auntie McDee

Joseph Burke
as The Professor

Charles Sellon
as Sheriff
View All

There are no critic reviews yet for Lucky Devil. Keep checking Rotten Tomatoes for updates!

There are no featured reviews for Lucky Devil at this time.