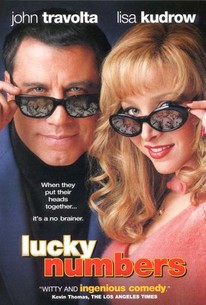 Critics Consensus: Nora Ephron's attempt at dark comedy is an uneven product, both in terms of the direction and the acting. The characters are unlikable to the point where you don't care what happens to them, and Ephron condescends to the material.

Critics Consensus: Nora Ephron's attempt at dark comedy is an uneven product, both in terms of the direction and the acting. The characters are unlikable to the point where you don't care what happens to them, and Ephron condescends to the material.

Critic Consensus: Nora Ephron's attempt at dark comedy is an uneven product, both in terms of the direction and the acting. The characters are unlikable to the point where you don't care what happens to them, and Ephron condescends to the material.

While lots of people dream of winning the lottery, one man hatches a more ambitious plan than just buying a ticket and hoping for the best in this satiric comedy. Russ Richards (John Travolta), a weatherman on a local TV station in Harrisburg, Pennsylvania, sells snowmobiles on the side, but both careers are in a rut thanks to an unusually warm winter. Russ's girlfriend Crystal (Lisa Kudrow) appears on the State Lottery's weekly televised drawing, pulling the numbered balls out of the rotating bin. With the help of a few of his less scrupulous friends - among them sleazy strip joint proprietor Gig (Tim Roth), small time hood Dale The Thug (Michael Rappaport), and Crystal's sleazy cousin Walter (Michael Moore) - Russ figures out a way to rig the drawing and have Crystal pull numbers that they happen to own. However, Russ discovers that making the scheme work and keeping everyone quiet about it is more trouble than it's worth. The supporting cast includes Chris Kattan, Ed O'Neill, and Bill Pullman; Nora Ephron, who previously worked with Travolta on the comedy hit Michael, directed. ~ Mark Deming, Rovi

Toya A. Brown
as Nurse

Kiva Dawson
as Dancer
View All

Not a great movie, and definitely not for kids.

Never finds the comic tone it's after.

The movie is as lifeless and unfunny as a corpse on a slab.

A dark comedy in the muckraking mode that starts out murderously well but then begins to unravel -- just like Russ' misbegotten schemes.

A movie that drips with condescension.

The characters are generally too repulsive even for our toleration, much less our affection, and the comedy is too mild to transcend that lack of involvement.

Many gifted comedic actors flail their way miserably through this trite, tone-deaf nonsense.

Hysterically populated by scoundrels; they're all cheating, cursing liars on the verge of murder, though they're also of the deviously charming sort.

With this dud of a dark comedy, it's clear that director Nora Ephron's unluckiest number is that of John Travolta.

The ping-pong ball trick was funny...but that was all.

Lucky Numbers" builds from a shaky first act and actually gets funnier as the tone gets darker.

a black comedy that would have been much funnier and edgier if it hadn't been softened up to accomodate a star of Travolta's magnitude.

Such a silly movie but really funny.

A movie that's so forgettable you may need to rewind it to remember what's going on. Still, it's as harmless as Goldilock's porridge.

Okay, I went into this movie thinking it was going to be utter crap, but since I love Roth, I decided to see it anyway. And I must say I was quite surprised. It had a nice flow to it, and a great cast that portrayed nicely eccentric characters, especially John Travolta. I'm so used to seeing him be a hardened criminal that when he's floundering around and squeeling in this I just couldn't help but laugh out loud. Lisa Kudrow was also great and played a real crazy bitch, which was nice considering the usual ditzes she plays. Roth was great as usual, and was strangely charming despite his character's immoral personality. Oh, and Pullman was great too; he was actually probably the funniest as a the laziest police officer you'll ever see. So all in all it had a few laughs and some witty parts, but it still felt like it was trying a bit too hard. I'd wait to see it on TV or rent it if you're really interested, but I'd only suggest it to Travolta or Roth fans.