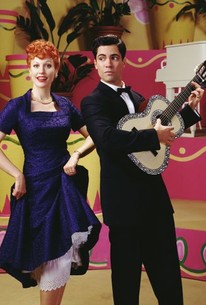 Using the 1960 breakup of the marriage between Lucille Ball and her husband/co-star Desi Arnaz, the film covers 40 years in the life of America's favorite redheaded gal, beginning with her early dramatic aspirations as an acting student (one of her fellow aspirants is Bette Davis) and her emergence as a platinum-blonde chorus girl in such film extravaganzas as Eddie Cantor's Roman Scandals. Once Hollywood is convinced of Lucy's fierce work ethic, and her willingness to do anything -- even allow herself to be caked in mud -- for the good of the picture, RKO Radio inaugurates a star build-up, though poor Lucy never quite gets beyond the B-list of leading ladies. In 1940, she falls madly in love with Desi Arnaz, a sexy Cuban bandleader and scion of an aristocratic family. Despite Desi's imperious nature, and his self-proclaimed "entitlement" to savor the favors of as many ladies as possible, Lucy and Desi are wed. Moving from RKO Radio to MGM during the war years, Lucy becomes a redhead to take better advantage of the studio's Technicolor cameras, and also learns the rudiments of broad slapstick comedy from such masters as Buster Keaton and Red Skelton. Even so, she is considered washed-up in Hollywood by the end of the 1940s, and her union with the constitutionally faithless Arnaz is on the rocks. Coming to the rescue of both Lucy's career and marriage is a new medium called television: With Desi as her creative Svengali, Lucy scales the heights of superstardom as star of the top-rated weekly sitcom I Love Lucy. Alas, the more popular Lucy becomes, the more her marriage to Desi suffers, and the film is unsparing in showing how fame and fortune can be fatal to domestic happiness. In the title role, musical comedy actress Rachel York doesn't resemble the real Lucy all that much, though she gamely recreates such classic I Love Lucy moments as the "Vitameatavegamin" commercial and the grape-stomping orgy. Far better cast is Danny Pino as Desi Arnaz, depicted as an enigmatic blend of Latin charm, filmmaking genius, and sociopathic serial philandering. While the teleplay is an acceptable overview of the subject's life and career, there is little in the film that is not common knowledge to Lucy buffs, save for a re-enactment of the childhood tragedy which left the heroine a mass of insecurities, and Lucy's morbid fear of birds (yes, birds). The three-hour Lucy first aired on May 4, 2003, telecast by Lucy's old home network, CBS. ~ Hal Erickson, Rovi

... [Lucy] York is a revelation, with the voice down perfect and the physical comedy at least approximate.

If you're a fan, you may watch in frustration, demanding, "Tell me something or more things I don't know."

There are no featured reviews for Lucy at this time.