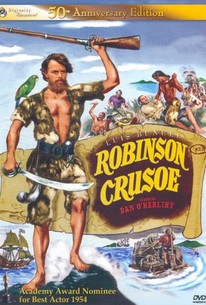 Exiled from his Spanish homeland, director Luis Bunuel set up shop in Mexico. Here he made his only American-financed film, The Adventures of Robinson Crusoe. This is a reasonably reliable version of the Daniel Defoe's novel about a 17th century shipwreck victim (Dan O'Herlihy) and his "Man Friday" (James Fernandez). Bunuel cannot resist tossing in his occasional barbs against the smugness of Society--though not so many as to scare away customers. The director's long-standing distaste with the church is discreetly manifested in a few brief scenes wherein Crusoe's faith in God wavers. Magnificently photographed in Pathecolor, Adventures of Robinson Crusoe was released in Mexico two years before its American distribution.

Emilio Garibay
as Pirate
View All

Buñuel posits a more existential relationship between Crusoe, nature and, most significantly, the character's loneliness.

Observing the figure of Crusoe in the round, Buñuel finds the prismatic reflections of all manner of hermits, cranks, and holy fools.

There are enough superb moments in this made-in-Mexico version of Defoe's classic novel to outweigh its occasional dullness of camera style.

...could pass as just another literary adaptation if you weren't watching closely.

Featuring an Oscar nominated turn by Dan O'Herlihy, this is a poignant version of the classic tale by the great Spanish director Luis Bunuel.

May be the most shocking film ever made by the great filmmaker -- precisely because it isn't shocking at all.

This is the best Crusoe I've ever seen.

The film in its simple telling, without sentimentality, evokes a feeling of awe.

A true oddity for Buñuel.

A fine film with a strong central performance, although it is hardly representative of the director's trademark style.

Perhaps the most "normal" film made by Luis Buñuel but not as simple as it may seem, since you can find a lot here about power relationships, religion, civilization and - most especially - loneliness, in an adaptation that benefits from a solid performance by Dan O'Herlihy.

The best known version of the guy on a desert island trope (why don't they ever do a woman on a desert island ... or was that "Gravity"? Nevermind.) It's from the 1950's so be prepared for some racism casually thrown about, but not enough to make you sic yer pitbull on the TV set. Based on a real story, natch.

An atypical Buñuel that shows how the director was wrong for this kind of material. Despite the lushy colour photography, it has too little swashbuckling and excitment to keep fans of the adventure genre entertained and not enough of the Buñuel trademarks to keep his admirers scratching their heads. One can see the director's subversiviness creeping in beneath the surfice, but it must be questioned if the social commentary of bourgeois master and submissive slave (which contribute to a not all that likeable protagonist) is due more to the dated content of the novel or Buñuel's own beliefs.

[font=Century Gothic]"Robinson Crusoe" is an entertaining adaptation of the venerable classic wherein Mr. Crusoe(Daniel O'Herlihy), the third son of an affluent family, goes to sea to find his fortune in 1659, only to be shipwrecked on a deserted island. After a rough start, he makes the best of it by salvaging what he can of the ship's stores and creating a new life for himself ashore.[/font] [font=Century Gothic][/font] [font=Century Gothic]What distiniguishes this version is that it is directed by Luis Bunuel during his exile in Mexico. Curiously, it does not reflect Bunuel's attitudes towards religion, instead suggesting that Crusoe's being cast away is divine punishment for his serving aboard a slave ship, followed by his taking to the bible. Also, Crusoe's relationship with Friday(Jaime Fernandez) will always be at least a little problematic, as it could be read either in favor of imperialism or very much against it.[/font]