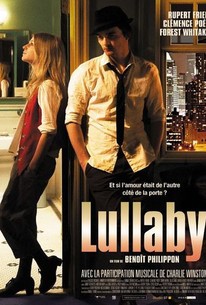 A singer consumed by grief discovers the power of divine intervention when a troubled woman barges into his hotel room, locks herself in the bathroom, and refuses to leave. Back in the day, when Sam (Rupert Friend) would take the stage at a local bar, the crowds would go wild. But when Sam's wife Josephine died, his dreams turned to dust along with her. Now, Sam spends every night alone in the hotel room where he and Josephine first met. His only friend is George (Forest Whitaker) the doorman, who also happens to be Sam's guardian angel. George isn't prone to making mistakes, so when he hands Pi the keys to Sam's room it's no wonder the singer begins to experience a sudden reawakening. As soon as Pi appears in Sam's room, however, she locks herself in the bathroom, and refuses to come out. Later, Sam convinces Pi to open up, and together the two lost souls forge a powerful bond. Together, they agree to meet on the opposite sides of the same door each night, and to bare their souls to one another until they day they fall in love. Only then will they open the door, and start living the rest of their lives together.

Charlie Winston
as Himself
View All

Critic Reviews for Lullaby for Pi

There are no critic reviews yet for Lullaby for Pi. Keep checking Rotten Tomatoes for updates!

There are no featured reviews for Lullaby for Pi at this time.