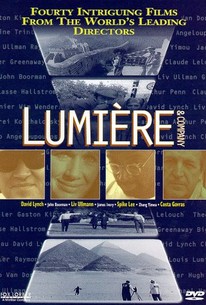 In celebration of the 100th anniversary of the Lumière brothers' first films, filmmakers Sarah Moon and Philippe Poulet challenged 39 renowned international directors to each complete a 52-second film using the original Cinematographe camera under the conditions endured by the brothers. The result of the project was this film, Lumière et Compagnie. The film stock used was homemade from a slightly altered version of the Lumières' recipe. No synchronized sound was allowed and only natural lighting was permitted. The participating directors included John Boorman, Costa-Gavras, Peter Greenaway, Lasse Hallström, Spike Lee, David Lynch, Liv Ullmann, and Wim Wenders. Among the actors who performed in the films were Liam Neeson, Lena Olin, Aidan Quinn, and Alan Rickman. ~ Matthew Tobey, Rovi

Critic Reviews for Lumière and Company

The 40 brief films are often wonderful, and always revealing in the way they show professional directors working on what amounts to a haiku.

Even the gamest of viewers will want to indulge her nostalgia judiciously, to avoid getting sour on the narcissism of the exercise.

Audience Reviews for Lumière and Company

A 55 second short made for the centennial of film (1996) using one of the original antique movie cameras.