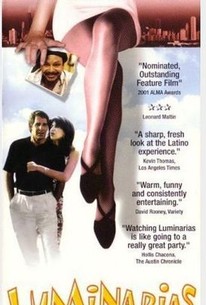 Billed as a Latina Waiting to Exhale, this film details the life and loves of four Hispanic women: Sofia, a therapist; Andrea, a divorced lawyer; Irene, a flashy clothes designer; and Lilly, an artist. The women gather every week at the nightspot Luminarias to discuss jobs, family, love, and sex. Sofia, who dates white men in the hope of fitting into Anglo culture, becomes smitten with an amorous Mexican waiter. On the other hand, Andrea, who believes that white guys are only interested in Hispanic woman as exotic love toys, finds herself falling for a Jewish lawyer. While Lilly deals with racism from her Korean-American boyfriend's family, sexpot Irene has her own conflicted feelings toward her transvestite brother. Luminarias was screened at the 1999 San Sebastian Film Festival.

There may be too much crammed in here... and Luminarias too often relies on coincidence and cliché to keep things moving. And yet it's wonderful to see adult women... portrayed so positively onscreen.

The emotions are genuine, and the touching scenes between Andrea and her son (Fidel Gomez), and the hilarious ones, keep the film moving.

There are no featured reviews for Luminarias at this time.