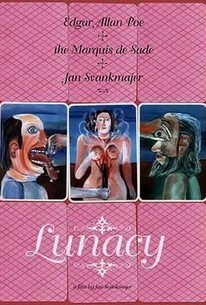 Critics Consensus: A Svankmajer movie is not for everyone, but he displays his usual creative flair for surreal imagery.

Critics Consensus: A Svankmajer movie is not for everyone, but he displays his usual creative flair for surreal imagery.

Critic Consensus: A Svankmajer movie is not for everyone, but he displays his usual creative flair for surreal imagery.

A man who fears he's edging into madness gets a fresh perspective on what insanity really means in this frantic, visually inventive black comedy from Czech auteur Jan Svankmajer. Jean (Pavel Liska) is a deeply troubled man who has been haunted by violent hallucinations since the death of his mother, who was committed to a mental institution when she passed on. While arranging his mother's funeral, Jean meets a fellow inmate who claims to be the Marquis de Sade (Jan Triska), and lives as if he's in 18th Century France rather than the Czech Republic in 2005. Jean strikes up an alliance with de Sade, though they can hardly be called friends, and after becoming an unwilling accomplice to de Sade's debauchery, Jean joins him at a hospital run by Dr. Murlloppe (Jaroslav Dusek), who offers "Purgative Therapy" for people who aren't mad but could be in the future. Jean falls for a beautiful nurse named Charlota (Anna Geislerova) who claims she's being held at the hospital against her will; in time, Jean hatches a plan to liberate her and the inmates, though he learns the truth is even more disturbing than he's been led to believe. Punctuated by animated tableaux in which raw meat scampers about the screen through the magic of stop-motion animation, Lunacy (aka Sileni) was inspired in part by the short stories of Edgar Allan Poe as well as the writings of de Sade, which are quoted liberally in the film. ~ Mark Deming, Rovi

Jan Triska
as The Marquis

Josef Polasek
as Inmate on Trolley

While Lunacy leaves you with the impression that Svankmajer is more expressive with cutlets than he is with his atypically human-dominated dreamscape, some of the images are doozies.

This is one of those deliriously unhinged movies that looks, feels and sounds genuinely insane, for all the right artistic reasons.

At nearly two hours Lunacy becomes repetitive, at first ingeniously and then with a slowly dulling edge. The meat parade ceases to shock.

Fans of movies about inmates who take over an asylum -- King of Hearts and Marat/Sade are prime examples -- will be amused by this surrealistic take on the subject punctuated by animated interludes featuring, of all things, dancing meat.

For all its visual surprises and visceral shocks, Lunacy is still the kind of film that is easier to admire than it is to actually like.

Wickedly funny and astonishingly conceived, the film is a nonstop cavalcade of shocks, surprises and enchantments. I loved every minute of it.

By turns absurdly funny, disturbingly dissolute, unnervingly claustrophobic, and caustically misanthropic, Lunacy offers viewers the sort of punishing pleasures that so many of its characters seem, in their different ways, to seek.

As pure cinema, there's no denying the power of Lunacy, although mostly that power can best be described as, well, sadistic.

Svankmajer continues to push at the boundaries of convention, juxtaposing blasphemy and torture while mocking the possibility of transcendence.

The definition of liberation as the act of being delivered from the hands of one lunatic into the hands of another who is equally mad remains universal in its political and social applications.

For all the arresting visuals, Svankmajer's morose depiction of the blurry line between madness and sanity is surprisingly pedestrian.

A mentally unstable man meets a modern day Marquis de Sade who holds blasphemous rituals in his basement and convinces his guest to commit himself to an insane asylum run by the inmates. In between scenes we see clips of steaks and disembodied tongues slithering about. It's bizarre, but not the strangest from surrealist animator Svankmejer; if you squint hard, it even looks like an ordinary horror movie. The tag line says it best: "Edgar Allen Poe + the Marquis de Sade + Jan Svankmejer = Lunacy."

If you're not familiar with Svankmajer's unique style of finding the endearing in the disgusting, nor grown accustomed to his meat puppets or skeletal animals, you might find this movie somewhat aversive at first - hopefully only to discover its brilliance in the end.