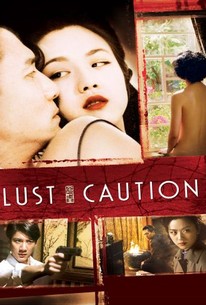 Academy Award-winning director Ang Lee adapts this Eileen Chang story set in World War II-era Shanghai that details the political intrigue surrounding a powerful political figure named Mr. Yee (Tony Leung) in Japanese-occupied Shanghai. Spanning the late '30s and early '40s, the movie introduces us to Hong Kong teen Wong Chia Chi (Tang Wei), a shy college freshman who finds her calling in a drama society devoted to patriotic plays. But the troupe's leader, Kuang Yu Min (Wang Leehom), isn't just a theater maven -- he's a revolutionary as well, and he's devoted to carrying out a bold plan to assassinate top Japanese collaborator Mr. Yee. Each student has an important role to play, and Wong puts herself in a dangerous position as Mrs. Mak; she befriends Mr. Yee's wife (Joan Chen), and slowly gains trust before tempting him into an affair. While at first the plan goes exactly as scripted, things suddenly take a deadly turn and Wong is emigrated from Hong Kong. Later, in 1941, the occupation shows no signs of ceasing and Wong is simply drifting through her days in Shanghai. Much to her surprise, the former actress finds Kuang requesting that she resume the role of Mrs. Mak. Now, as Wong again gains intimate access to her dangerous prey, she must struggle with her own identity in order to pull off the performance of a lifetime. ~ Jason Buchanan, Rovi

Tsung-Hua To
as Old Wu

He Sai-fe
as Hsiao Tai-tai

He Saifei
as Hsiao Tai Tai

Yu Ya
as Chu Tai Tai

Deng Wei
as Prostitute in Brothel

Five Favourite Films with Ang Lee
Cannes 2009: RT Chats to Ang Lee and team Taking Woodstock
RT on DVD: Cram For The Oscars With Michael Clayton, In The Valley of Elah, And More Out This Week

What lingers is the suspicion that women carry a burden of war they can't ever put down, and that even noble idealists can justify turning their girls into whores.

You leave the theatre a trifle exhausted but rewarded by a resonance few films possess.

A pleasure to watch a film as visually stylish as it is psychologically demanding. I wish it had been twice as long.

For his sheer muscular verve and ambition, Lee deserves a standing ovation.

Lee has consistently demonstrated a certain talent for exploring human relationships, and Lust, Caution is perhaps one of his thorniest, most complex works.

Alas, Lee would have benefited by showing more lust and less caution.

Lust, Caution is so ambitious and detailed that you'll never be bored.

Lee is hot, engaged, emotional, sincere and fundamentally looking at any slice of life through a sexual lens.

Lee is hot, engaged, emotional, sincere and fundamentally looking at any slice of life through a sexual lens.

Lovers of genuine cinema will get blue balls

Lust, Caution is based on a novella that is apparently loosely based on some actual events. That last bit kinda makes sense to me, but it really felt like something based in reality. The story is set primarily in Hong Kong in 1938 and Shanghai in 1942 amidst the Japanese occupation of China, and the puppet government established there and concerns a young woman involved with a resistance group who plot to kill those "traitors" collaborating with the ruling Japanese government. As part of their plan to kill a certain target, the young woman goes undercover as his mistress, but soon finds herself in a dangerous position as her growing connection to him can't help but conflict with her efforts to help assassinate him. Looking at just the broad points, this is not a new sort of story, and this sort of thing has been seen quite a lot before, especially with the whole war time angle. What makes this one unique is the specifics, namely the Japanese occupation of China, which is a topic not often explored in film (so far as I know). That's unfortunate too, because this is a rather fascinating subject. I'm glad that Lee decided to try to bring more attention to it. Now, for the rest of this review, I need to make it clear that the version I saw was not the original (preferred) NC-17 cut, but the censored R-rated version. For this reason, I was kinda let down, and imagine that I'd be giving the regular version a higher grade. From what I can tell, all that's changed is the numerous and graphic sex scenes have been toned down a hair. That's kinda dumb too, as these are things that are actually rather crucial to the story and characters, specifically the emotional impact of Mak Tai Tai and her relationship to the man she's supposed to help assassinate. The film was also wrongly billed as an erotic thriller. Yeah, it's a suspense/espionage thriller, but I wouldn't really call it erotic. It's steamy, sure, but the tone and context keep things from really being all that titillating. Yes, the censored cut gets the point across, but it feels forcefully compromised. Okay, enough with the ranting. All in all, this is quite a film. It's quite lengthy, but surprisingly light on dull moments. It's really absorbing and interesting, and you really get involved with how the events will play out. The love that Mak Tai Tai falls in with Mr. Yee isn't the sweetest, but there's no denying the two have a deep emotional connection, despite his roughness and trust issues. The period details are quite nice, and the film has gorgeous cinematography. The writing is quite nice, the performances are terrific, and this is a wonderfully done variation on a theme. The ending is a bit odd and somewhat of an unsatisfying letdown, but the buildup remains quite good. All in all, a fine piece of work, even though the censorship issues leave some unfortunate scars.

Lust, Caution is a film of epic proportions. Every aspect of filmmaking reaches the kind of quality that makes me want to poke my eyes out when I have to watch the gross of the modern-day production at the theater. Lust, Caution has everything down: perfect character development, perfect performances, flawless art direction, amazing music. It has all the spirit of a classic, even despite its rather explicit sexual content which might make it less accessible to massive audiences. In the future, though, I'm sure it will be appreciated for what it truly is and people will choose to see it for its quality and its emotional force, regardless of whether they feel awkward about its NC-17 aspects. I know just about nothing about the context here, which is the Japanese occupation in China, but the message came across clearly. The plot, in itself, is quite complicated and I feel it's useless to write it down here, mainly because I would hardly say that's L,C's principal attractive. Most importantly, at the core of the film, is a torrid, mainuplative, violent affair between Tang Wei's character and Tony Leung's. She has to get close enough to kill him, and the way to get there is too often through encounters in hotels where they don't speak to each other, they just... do it, Their communication takes place on a different level than conversation, and during those brief rendez-vous it is possible to see how they might be falling for each other. But what could be more tragic, inconvenient, and impossible than that? Ang Lee's film has the strength of a space rocket. The emotional tension between characters and situations is such that an audience can become deeply involved in it, forget the outside world so to speak. Lee makes some not very likeable characters into people with souls and horrible conflicts. In that sense, it would be easy to catalog Lust, Caution as a tragedy, rather than a drama: sadness, sacrifice, atonement, emptiness constitute the drive behind the action, and little more. Beneath the political and moral implications, there's a huge problem worthy of Greek theater: two people desperately in love with each other, who also happen to have an unexpected, dangerous control over the other's life, and strings that attach them to causes and interests ready to pull the arm at any time. The girl has to be around the man knowing that she can't be as emotionally close as she wants to, knowing that any false step would make him kill her, and yet completely aware of the fact that she wouldn't have it any other way.

I'm very surprised I didn't like this movie more. It's all beautifully shot, acted, and scored, but after the first hour, the deliberately slow pace disengaged me. It's a fascinating concept - falling in love with a man you're attempting to kill, a brutal man at that. The ending is killer, but I wanted to see more of Wong Chia Chi's emotional transformation up to the moment she betrays the resistance. Her one monologue is merely a teaser.