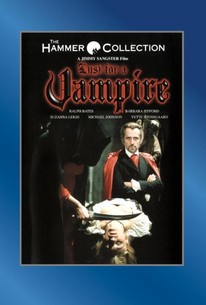 In this sequel to The Vampire Lovers, a bloodsucker enrolls at a British finishing school and finds more than enough nubile bodies to keep her satisfied.

Melinda Churcher
as Schoolgirl
View All

Critic Reviews for Lust for a Vampire

As one of the later Hammer productions, an easily observable effort is made to increase the maturity and controversial elements.

Sex is very much at the centre of Lust for a Vampire, to the detriment of just about everything else.

With its list of faults, Lust for a Vampire falls into the "for fans only" category.

Hammer had by this point entered its decidedly more robust blood-and-boobs phase.

Sex and violence cheapie is pain in the plunging neckline.

Audience Reviews for Lust for a Vampire

The follow up to "The Vampire Lovers" is cheap and shoddy in comparison though still fun for fans of Hammer. Ingrid Pitt refused to return, rightly citing a poor script, so Yutte Stensgard steps in as Carmilla. Though she's very easy on the eye she just can't compete with Pitt's electric charisma. Jimmy Sangster, who wrote many great scripts for Hammer, directs this one in bland fashion. Ralph Bates is fun as a struggling poet who bluffs his way into a teaching job at an all girl boarding school. Respect.

If they wanted to make a soft core exploitation picture, they should have made it and kept the vampire plot out of it, because it doesn't help the story anyway. It could help the story, but they don't allow it to develop that way.

Like The Horror Of Frankenstein, this is one of the most reviled Hammer efforts - but, again, I found it not that bad after all! Still, being one of the countless vampire-themed outings from the studio, it does feel like a tired rehash of better films; actually, it happens to be the middle part of Hammer's "Karnstein Trilogy" (inspired by J. Sheridan Le Fanu's classic short story "Carmilla") - if, admittedly, the least of them. As was the case with The Vampire Lovers and would be again with Twins Of Evil, the main behind-the-scenes credits weren't the usual Hammer stalwarts: producers Harry Fine and Michael Style, screenwriter Tudor Gates and composer Harry Robinson. While the latter's score is appropriately grandiose for the most part, the love song - apparently inserted without director Sangster's consent, or even knowledge - is a total embarrassment! It starts off well enough: all-too-typical material, to be sure, but very atmospheric (Carmilla's reincarnation, for instance, or the scene where hero Michael Johnson is surprised at the dilapidated Karnstein Castle by three cloaked female figures he takes to be vampires) and reasonably entertaining for all that. Other effective moments include: Carmilla's botched seduction of the Suzanna Leigh character; a couple of falls down a well, rendered stylized by the use of slow-motion; and the climax with the vampires trapped inside their flaming castle (lit by the inevitable torch-bearing villagers). However, following the demise half-way through of top-billed Ralph Bates (yet another impressive turn from Hammer's candidate to replace Peter Cushing and Christopher Lee), the film slowly falls apart; reportedly, Cushing was supposed to have played the scholar/would-be vampire disciple - but I can't help feeling he'd have been both too old and ill-suited for the role. Similarly, Sangster replaced Terence Fisher: it would have been interesting to see Hammer's top director tackle "Carmilla" - but I wonder how he'd have handled the erotic aspects of the story. With its full-frontal nudity and scenes of lesbian love-making, The Vampire Lovers had been credited with pushing the boundaries of permissiveness in Hammer horror - and this certainly follows in that tradition, with the script coming up with every possible excuse to have its scrumptious female cast disrobe! The film does suffer from the lack of a star cast or even those familiar Hammer faces (other than Bates, that is): there's no denying that leading lady Yutte Stensgaard looks great throughout but, ultimately, she makes for an inadequate vampire which to me is no fault of the actress since she's made to play the character as being more pathetic than evil); Suzanna Leigh is an equally attractive heroine; Barbara Jefford and Mike Raven, however, don't exactly ignite the screen as the Karnstein descendants (he was an especially poor choice and Hammer apparently realized this, to the extent that they had his voice dubbed by Valentine Dyall - while close-ups of Christopher Lee's eyes were roped in to 'aid' his character display the requisite fierceness!); Helen Christie is unintentionally funny as the headmistress of the school (where a good deal of the action takes place), who breaks down at ill-fated Police Inspector Harvey Hall's interrogation after a girl goes missing - which she fails to report immediately so as not to damage the school's reputation. This is not one of the better efforts from Hammer but worth a look if you can get your hands on the DVD.

Enjoyable enough but rather silly middle part of the 'Carmilla trilogy', loosely based on a story by J.S. Le Fanu. This film was preceded by "The Vampire Lovers" and followed by "Twins of Evil", neither of which it is equal to. Yutte Stensgaard is lovely to look at but, alas, no Ingrid Pitt in the acting stakes - no pun intended. Mike Raven makes a poor Christopher Lee substitute. Look out for a cracking blooper in the final scenes when the camera crew can be glimpsed to the left of the frame as a coach hurtles towards a group of villagers.

Lust for a Vampire Quotes