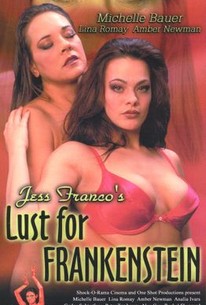 Euro-horror cult figure Jesús Franco directed this erotic re-telling of Mary Shelley's classic tale of terror. Moira Frankenstein (Lina Romay), the grand-daughter of noted mad scientist Dr. Frankenstein (Carlos Subterfuge), has become obsessed with the work of her ancestor and she decides to pick up the family business where he left off. Moira stitches together a female creature (Michelle Bauer) and soon discovers that her creation's sexual appetites are just as strong -- and just as wide ranging -- as her own. However, Moira's lustful relationship with the monster is tarnished when she discovers the creature has been slipping out at night for assignations with a variety of men and women. The supporting cast includes Alex Cox and Amber Newman.

Critic Reviews for Lust for Frankenstein

Interesting use of the video format, but basically a soft-core mess

Marked and marred by the astonishing ineptness of its every conceivable aspect.

Audience Reviews for Lust for Frankenstein

There are no featured audience reviews yet. Click the link below to see what others say about Lust for Frankenstein!