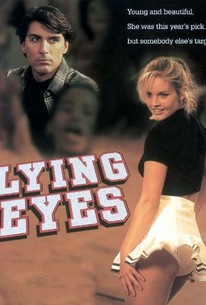 In this romantic thriller, Cassidy Rae stars as Amy Miller, a sexy, virginal high school cheerleader and the current object of Derek Bradshaw's fantasies. A slick 33-year-old lawyer, Derek (Vincent Irizarry) is the epitome of creepiness: a straight-faced liar, a sneaky philanderer, and magnetically charismatic. Derek picks his prey and seduces Amy with romantic evenings and extravagant gifts much too adult for an 18-year-old. Amy's support system falters as she withdraws from her friends and her hard-working single mother (Sherry Hursey), while a mystery stalker repeatedly threatens Amy's life. Is it Derek's suspicious wife Elizabeth (Jamie Rose), Amy's best friend Dana (Ashlee Levitch), a jealous ex-boyfriend, or some other anonymous competitor? When Amy finally acknowledges Derek's duplicity and attempts to end the affair, he won't let her off that easily, and the threats escalate.

There are no critic reviews yet for Lying Eyes (Bed of Lies). Keep checking Rotten Tomatoes for updates!