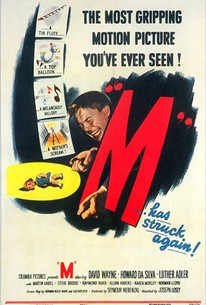 It took nerve for director Joseph Losey to attempt a remake of Fritz Lang's classic chiller M, but by and large Losey was up to the challenge. David Wayne steps into the old Peter Lorre role as the compulsive child-murderer who is tracked down and then placed on trial by the criminal underworld. Whereas the original was set in Berlin, the remake takes place in Los Angeles. Syndicate chieftain Marshall (Martin Gabel) organizes his fellow crooks in order to bring "M" to justice, thereby keeping the police off their own backs. Found guilty by his "peers" and sentenced to death, "M" makes an impassioned plea for his life, explaining that he is unable to stop himself from committing his unspeakable crimes. Filmed just before Joseph Losey was banned from Hollywood in the wake of the communist witch-hunt, M features such fellow blacklist victims as Howard da Silva, Luther Adler and Karen Morley.

Sticking closely to the plot of the original, Losey turns the story into pungent Americana through his attention to alluringly grubby Los Angeles locations.

Joseph Losey's pulpy 1951 remake of Fritz Lang's M is fascinating for many reasons, not the least of which is its location-shooting in Los Angeles' Bunker Hill neighborhood.

A society of persecution laid jaggedly bare, from one poet of paranoia to another

Unnecessary remake that pales in comparison with the Fritz Lang classic.

There are no featured audience reviews yet. Click the link below to see what others say about M!