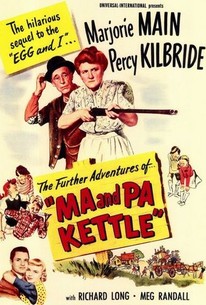 The title couple and their enormous brood of bumpkins made their movie debut in the film version of Betty McDonald's humorous book The Egg and I (1947) where they appeared as supporting characters. Audiences found them funny and so the characters got their own long-running series of B movies. Ma and Pa Kettle is the first in that series and centers on the exploits of the impoverished hayseed family after Pa wins a contest by writing a jim-dandy slogan for a tobacco company. The Kettle's prize is a brand new, ultra modern, fully automated home. It's a good thing too, for Ma, Pa and their 15 kids were about to get booted out of their previous wreck of a home. Of course the film is at its funniest when the Kettles are trying to figure out how to operate their fancy new digs.

There are no critic reviews yet for Ma and Pa Kettle. Keep checking Rotten Tomatoes for updates!

There are no featured reviews for Ma and Pa Kettle at this time.