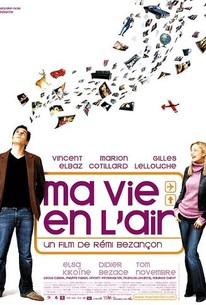 Remi Bezancon's romantic comedy My Life in the Air stars Vincent Elbaz as Yann, a young man whose mother died during a plane flight while giving birth to him. These events traumatized him to the point that is unable to fly, even though the airline would allow him unlimited free access to any of the flights. Now he works as a flight simulator instructor, although he never actually leaves the ground, and he must sort out his feelings when an old girlfriend returns to confuse issues with his current gal pal. ~ Perry Seibert, Rovi

Love Is In the Air is a pleasant surprise as a well-conceived, well-crafted, well-acted romantic comedy that has lots of both.

There are no featured audience reviews yet. Click the link below to see what others say about Ma vie en l'air (Love Is in the Air)!

Ma vie en l'air (Love Is in the Air) Quotes