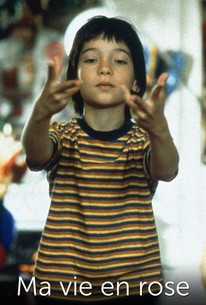 Critics Consensus: Ma Vie en Rose follows a boy's exploration of his gender identity with warmth and empathy - for its young protagonist as well as the family affected by his journey.

Critics Consensus: Ma Vie en Rose follows a boy's exploration of his gender identity with warmth and empathy - for its young protagonist as well as the family affected by his journey.

Critic Consensus: Ma Vie en Rose follows a boy's exploration of his gender identity with warmth and empathy - for its young protagonist as well as the family affected by his journey.

Alain Berliner's colorful and poetic Ma Vie En Rose not only bends the lines between reality and fantasy, but also those notions of gender roles as it tells the story of a seven-year-old boy who creates family chaos when he informs them that he wants to be a girl. At first everyone shrugs off the boy's desire as a childish phase, but when he starts appearing publicly dressed as a female and stating that he intends on marrying the boy next door when he grows up, the upstanding and proper people (including peers and neighbors) get seriously worried. While worry turns into outright hostility, the poor innocent child becomes increasingly bewildered as he cannot understand why he cannot simply change his gender.

Michel Forget
as Hand of God
View All

Credit should go foremost to du Fresne, who is great as Ludovic. It's pretty astounding how capable he is at conveying Ludovic's feelings, particularly when she's swallowing others' transphobia.

The movie is about two ways of seeing things: the child's and the adult's. It shows how children construct elaborate play worlds out of dreams and fantasies, and then plug their real worlds right into them.

Queer movies can run adjacent to or parallel to other Queer lives, but it's rare that a movie will ever intersect with my life or even contain numerous scenes that I have personally lived. Ma Vie En Rose does that.

About the unimaginative struggle to maintain conventional respectability, and the transgender child who is having none of it...

Director Alain Berliner and screenwriter Chris vender Stappen have created one of the most authentic, touching households ever put on film.

This bright and touching drama celebrates diversity as one of the enchantments of life.

...just the right recipe to leave a smile on your face.

*High marks for set decoration and cinematography as well as casting and direction.

Writer and director Alain Berliner has made a fresh film about what it takes to survive in a world where people still measure others by codes of conformity, prejudice, and small-mindedness. The incomparable Ludovic stands his ground. Ma Vie En Rose isn't necessarily trying to advance an agenda, and it's not a movie about homosexual issues. It's about someone who is convinced he's something that physiologically he's not. Maybe it's just a phase he's going through, maybe he'll grow up to be gay. The movie doesn't really address that. It's about what is going on in Ludovic's head right now.

That poor cute little boy (girl). My heart wept for his (her) situation. :(